A. Jeffrey (“Jeff”) Dando, born in 1938, died Sunday morning, July 18, 2021, after a long struggle with Parkinson’s disease, which he handled with grace and humor. He was at home in West Tisbury with his family, his beloved dog, and his favorite music in the background. This well-loved and much admired man died at 82 years old. 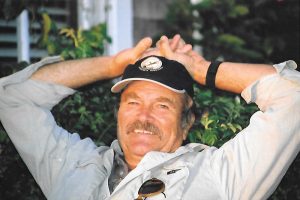 He was born to William Albert and Margaret (Ellis) Dando in Philadelphia, PA. He attended Mercersburg Academy and received a degree in civil engineering at Cornell University. He then spent three more years in Ithaca at Cornell Law School, graduating with his JD in 1964.

Drawn to New England, as a result of summer trips to Maine, Jeff began his legal career in Boston at Bingham, Dana & Gould, and moved to Goodwin Procter & Hoar in 1967, becoming a partner in 1973. As a pioneering lawyer, Jeff was instrumental in some of Boston’s most significant real estate projects, such as Copley Place, where he set the legal precedent for resolving complex issues related to control of air rights; Harbor Point, where he helped to transform a troubled public housing project into a thriving mixed-income community; and the Charlestown Navy Yard, where he helped to achieve the successful redevelopment of surplus federal property on the Boston waterfront. Jeff’s sharp mind and his ability to navigate complex legal and political issues contributed directly to the success of those projects, which were the first of their kind.

As hiring partner at Goodwin for several years, Jeff was a valued mentor to many young lawyers. In the last five years of his career, he was the firm’s managing partner. His colleagues say he was “admired and respected by those he hired, led, advised and befriended” and “a true original”. He retired in 1998.

Jeff was married to his first wife, Susan (Schmedes) Dando for 21years. They raised their children, Holly and Evan, in Essex, MA, and moved to Boston’s Back Bay in 1976. He has been married to Margery Luening since 1985. Both of them had family on Martha’s Vineyard. As a visitor, Jeff grew to love the Island. In 1981, Jeff and Marge bought what would become their permanent home in West Tisbury on the Whiting Farm. Over the years, Jeff planted fruit trees, tended a garden, and even tried raising chickens. He felt blessed living there.

He was an avid fisherman from childhood, tying flies and making fly rods, participating in “the Derby”, proudly winning a few prizes. He loved boating, particularly in the Florida Keys and Stuart, FL, where he and Marge spent many years vacationing, before and after his retirement. In addition to fishing, Jeff was passionate about golf. He enjoyed memberships in several clubs, including The Country Club and Vineyard Golf Club. He was a true “gentleman of the game.”

Jeff was a volunteer for Hospice & Palliative Care of MV, until his own struggle with Parkinson’s caused him to withdraw from this and other activities he found rewarding. But he didn’t complain. When asked if he was angry about the disease, he said no, “I’ve had a great run!” Jeff was a kind, humorous, humble, bright, self-effacing, well-respected man and beloved friend to many.

He is survived by his wife, Marge, his children Holly Heyward and Evan Griffith, his sister and brother-in-law Virginia and Charles Kremp, and their sons Scott, Steve, Drew and Chad Kremp and families; as well as his nephew and nieces Erich, Sabrina, and Talia Luening, his grand-niece Ella, and his uncle, Richard Ellis.

A celebration of Jeff’s life will be announced at a later date.

In lieu of flowers, donations in his memory may be made to The MGH Parkinson’s and Lewy Body Fund, MGH Development Office, 125 Nashua St., Suite 540, Boston, MA 02114, Attn: Kylie Wojcicki; to the VNA of Cape Cod Hospice; to the Hospice & Palliative Care of Martha’s Vineyard; or to the Michael J. Fox Foundation.