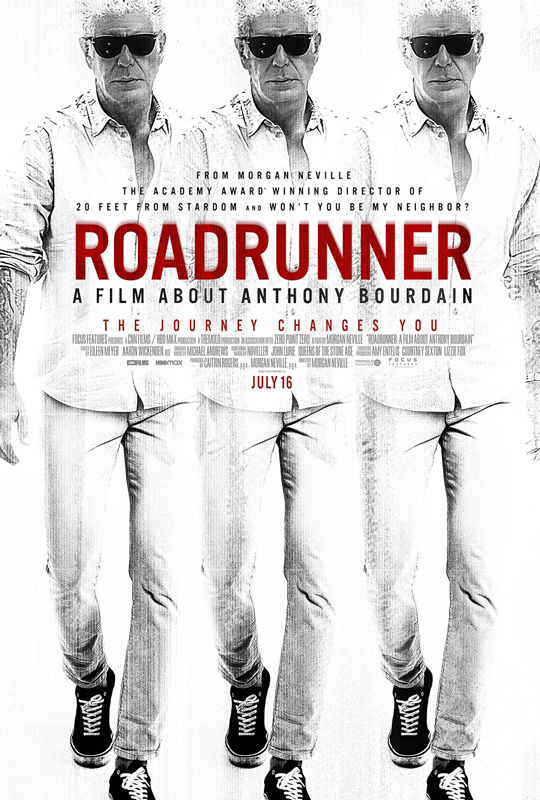 “Roadrunner: A Film About Anthony Bourdain,” directed by Morgan Neville, kicks off the M.V. Film Society’s Documentary Festival on Monday, August 2. Included is a discussion with Dawn Davis, editor of Bon Appétit magazine.

A celebrity cook, the late Bourdain was a charismatic, larger-than-life personality. He rose to popularity with publication of “Kitchen Confidential: Adventures in the Culinary Underbelly,” which was an instant success, and this memoir of his life in the kitchen catapulted him into fame. Working as executive chef at New York’s Brasserie Les Halles, though, he developed a cocaine habit and had drug addictions for most of his life. “By 43, I thought I’d had all my adventures,” he said, and added, “For me it was overnight from cook to author.”

Bourdain’s first TV show was “Cook’s Tour” (2000) in which he traveled around the world, writing about the different foods he ran across. It became obvious he had never traveled before and had gotten his view of the world from films and books.

He married his first wife, Nancy Pulkowski, in 1985 and traveled from Japan to Vietnam. She described him as actually a very shy human being, although he came alive in front of the camera. The challenge for him was to be whole and yet be on TV. For “Cook’s Tour” he traveled for a living, going from airport to airport, city to city. “This, it appears, is my life,” he said. “I was hooked on travel.” He was on the road for two years. As many people said, he was a romantic, but his marriage began falling apart from his travels. In 2006, he landed in Beirut, and “We got caught in a war.” He spent his time getting tan and watching the war. He stopped doing “the rosy sum-up.” “That antiquity (of Beirut) is what it’s about,” he said.

He married his second wife, Ottavia Busia, and shocked the public by having “a kid,” Ariane. He was traveling 250 days a year, but the little time he was at home, he doted on his daughter. “I’m never happier than standing in the backyard and being the TV dad,” he said. He said the bittersweet curse was that nothing felt better than being home; then nothing felt better than leaving home.

Bourdain traveled 662,000 miles and went around the globe 26 times. His talent was to hear other people’s voices, and he won two Emmys. He was a consummate storyteller but didn’t realize how political his commentary was. His work was almost never about food; it was about being a person. From the early 70s he spent time in Provincetown and continued to be a junkie. “Some part of me wanted to be a dope fiend,” he said.

He became fascinated by jiu jitsu and practiced it at age 58. By 2016, his life with his daughter and Ottavia was over, and the next year he began a relationship with the actress Asia Argento. He became very stressed, weary, and exhausted. In Hong Kong, however, he had an intense resurgence of energy. His manic nature became obvious, when the highs were very high, and the lows were ugly. When he learned that Asia had been raped by Harvey Weinstein, he became obsessed with the #MeToo movement.

Bourdain became palpably angry, and his life took a dark turn. He felt alone and that he didn’t have anyone to talk to. He took his own life in 2018 while working on an episode of “Parts Unknown” in France.

Information and tickets for “Roadrunner: A Film About Anthony Bourdain” and the Documentary Film Festival are available at mvfilmsociety.com.