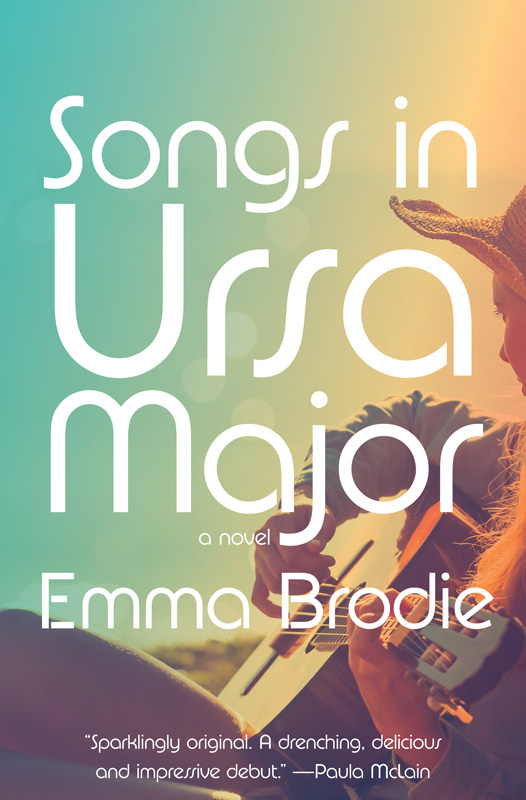 The play between the real-life relationship and one of novelist Emma Brodie’s imagination between James Taylor and Joni Mitchel is the jumping off point for an engrossing, intimate tale, “Songs in Ursa Major.” One of her lines perhaps sums the book up best: “A time of myth, a time of beauty, a time of rock and roll.”

It’s 1969 and our protagonist, Jane Quinn, lives on an island off the coast of Cape Cod, a thinly disguised Martha’s Vineyard. The dynamite writing of the first chapter sets the book in motion. Jesse Reid (Taylor), a rising superstar singer-songwriter, gets into a major motorcycle accident on the way to performing in the island’s outdoor music festival. Jane’s (Mitchell) longtime local band is plucked from obscurity to step in at the last second. The crowd is incensed, but as soon as she starts singing, they are won over. Brodie writes from the viewpoint of Curtis, a Rolling Stone critic, who is on the scene: “Jane Quinn surveyed the audience with self-assurance, as though to say, I know you think you want Jesse Reid, but I’m about to show you something so much better. It was like watching someone hold a lighter up to a monsoon… What a range — a soprano, in the school of Joan Baez and Judy Collins, though not nearly as patrician-sounding as Collins, or as embattled as Baez. There was an untrained edge in her voice, an almost Appalachian coarseness, that raised the hair on Curtis’s neck. Just gorgeous… Jane’s voice stole the show. Her loveliness felt personal — it was impossible to look at her and not take flight in some small part of you.”

Jane gets picked up by Willy Lambert, an A&R rep for a major record label, who happens to also represent Jesse. Jane and Jesse meet during his convalescence on the island, and immediately a connection is born. Jesse wants to nurture Jane’s talent, but the relationship from the start is push and pull as she is determined to keep her emotions in check both because of a secret she carries and her determination to make it on her own. Brodie writes of Jesse: “He smiled faintly. ‘You weren’t having it, though,’ he said. ‘That’s the thing with you. You’re the one person who never seemed to want anything from me.’”

Ultimately, the two become a couple for a while when on tour together where The Breakers are Jesse’s opening act, and their ongoing connection continues throughout the story even after Jane breaks it off with him and their careers go their separate ways.

We follow Jane’s coming-of-age struggles both in cutting her first and then second album and performing as she strives to make a name for herself in an industry full of chauvinistic, sexist men who want to control her music and her image. But Jane is fiercely protective of her vision. Throughout, her tenacity, conviction, and courage shine through and, ultimately, her ability to love.

Jane’s inner strength is strongly tied to the tightly knit matrilinear household she has always lived in. And her grandmother, aunt, and cousin, and her mother — a singer-songwriter who walked out one night during Jane’s childhood and never came back — are significant players in the narrative. So too are the members of her original band and her friend, Willy, who is one of the most appealing characters as Jane’s staunchest advocate throughout her troubles.

Brodie skillfully interweaves themes of mental illness, addiction, and family secrets throughout the tale. But its heart and soul is music, and she brilliantly uses the leitmotif of song lyrics liberally placed throughout to add a sensual, auditory-like dimension to the particular moment.

Brodie explains about her choice to use lyrics, “I was really taken by the idea that a song can become timeless when the events that inspired it can be lost to time.” She adds, “Any great album makes you want to know the story behind it — with ‘Ursa Major,’ I wanted to give readers a front-row seat to the whole process: Jane’s experiences and the songs and images they inspire.”

About the book’s title, Brodie says, “Songs in Ursa Major is the title of fictional up-and-coming singer-songwriter Jane Quinn’s 1971 confessional album; as Jane seeks her place in the world, she begins to see how she exists within a constellation of relationships — the album’s title track, ‘Ursa Major,’ tells of Jane’s quest to locate her own north star.”

This quest sits at the heart of Brodie’s novel, which she says is, “An escape. This book is all about psychic shelter, and I hope that it will provide that for some folks!”

“Songs in Ursa Major,” Emma Brodie, Alfred A. Knopf, $26.95. Available at Bunch of Grapes and Edgartown Books. The link to Brodie’s Zoom talk on Wednesday, August 4, at 7 pm will be posted in the Edgartown library’s newsletter. Brodie will sign copies of her book on the porch at Edgartown Books, 44 Main St., at 2 pm on Thursday, August 5.