Ronald Burns Campbell, Jr., born July 12, 1938, in New York City, died on July 25, 2021, at his home in Edgartown, Massachusetts. Known to everyone as Sandy, he grew up in New York City and spent his childhood summers in Colebook, Connecticut. Sandy is a graduate of the Buckley School, Phillips Exeter Academy, and Yale University. Sandy began his career at Sylvania and went on to earn his PhD in Engineering and Applied Mathematics at Harvard University. A true Renaissance man, he also earned an MA in English literature from Harvard. He worked at Raytheon for eighteen years and then took a position at Xerox as Chief Technical Officer, moving his family to Greenwich, Connecticut, and then to Rochester, New York. After his retirement from Xerox, he took a teaching position in the Mechanical Engineering Department at Massachusetts Institute of Technology, where he enjoyed teaching design to undergraduates. Most recently, he was working with colleagues to design an innovative solar energy solution. 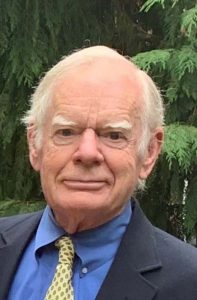 Sandy loved the theater, classical music, fine wine, sailing, following the Red Sox and Patriots, travel, and great books. His library overflows both of his homes. His life-long interest in theater began at Exeter and was nourished through years at the Yale Dramat. A loyal alumnus of all of his schools, he enthusiastically looked forward to all reunions. Always well-informed, he read the NY Times and the Boston Globe (print version only!) daily, and read the Economist cover to cover. Sandy was in perpetual motion. He built furniture, wrote plays, designed additions to his home, messed around with boats – including constant improvements to the Harmony II – and constantly planned trips. He was an expert on the British canals, where he cruised many times and even volunteered his services on canal restoration projects. He loved planning surprises and throwing parties.

Above all, he loved his Martha’s Vineyard home and his family. He delighted in family gatherings. No family celebration was complete without Sandy unveiling a surprise plan for a trip or unexpected gifts for his wife, children, or grandchildren. Whether it was enjoying Red Sox games at Fenway, sailing the waters of the Vineyard, skiing the icy slopes of New England and the powder of Utah, or exploring trails around the world, he brought joy and laughter to his family. His life fulfilled one of his favorite sayings: Never a Dull Moment!

A memorial service will be at 11 am on Thursday, August 12, at the First Parish Church, 327 Concord Road, Sudbury, Massachusetts. Details of the service to follow. In lieu of flowers, please consider a donation in his memory to Sheriff’s Meadow Foundation of Martha’s Vineyard or The ARC of Massachusetts.