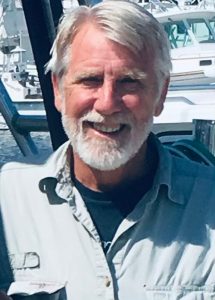 Mort was born in Boston, Mass., to Matthew Phipps Terry and Nancy Ells Terry on September 7, 1947. He grew up in Hingham and Chatham, Mass., and graduated from Hebron Academy in Maine in 1966. He then attended Northeastern University in the late 1960s and later settled on Cape Cod.

Captain Mort was a charter fisherman on his boat “Fishtale” out of Saquatucket Harbor in Harwich Port for over thirty years, sometimes leading over a hundred fishing trips per summer. Prior to starting his charter business, Mort was a successful builder and tradesman on the Cape, in Vermont, and in Colorado. A long-time resident of Harwich, Captain Mort built his home, which overlooks a cranberry bog and the Herring River salt marsh. He leaves behind his partner Marie Meyer-Barton of Martha’s Vineyard; his son, David Terry and his wife Emily, three grandchildren, Julia Terry, Henry Terry and Miles Terry, all of Brookline, his sister Sarah Terry and her husband Craig Owings of Boquete, Panama, his brother Steve Terry and his wife Judy of Cotuit, and sister Ruth Terry and her husband Brenton Welsh of Orleans, and Uncle Theodore F. Ells and his wife Tina of Stony Creek, Connecticut, as well as his good friends and family Mary Eng, Jimmy Eng, Linda Graetz, Kory Eng, Karen McCarthy, Oona Eng-McCarthy, Lila Eng-McCarthy, and Matthew Barton, all of Massachusetts.

Captain Mort enjoyed fishing with his family, long-time customers, and his many worthy first mates, including Olivia and Finn Swenson of Centerville. He also loved taking long walks on the beach with his partner Marie, rooting for the Bruins, Red Sox, Patriots, and Celtics, and spending as much time as he could with his extended family and his beloved grandchildren.

A memorial service will be held on Wednesday, August 4, 2021, at 11 am at First Parish Brewster Universalist Unitarian Church, 1969 Main St., Brewster, MA.

In lieu of flowers, memorial donations may be made to the Association to Preserve Cape Cod: apcc.org.

Notes of comfort may be made to his family at chapmanfuneral.com.