Otis P. Jeffers, Jr. slipped away peacefully on Thursday, July 8, 2021, at the VA Hospice unit in Brockton, Massachusetts. He was the husband of Barbara (Debettencourt) Jeffers, who predeceased him in October 2017. He was the father of Peter Jeffers and the stepfather to David and Jackie Amaral. Otis was born on July 26, 1933, in Oak Bluffs, Massachusetts, to Otis P. Jeffers and Thelma (Randolph). 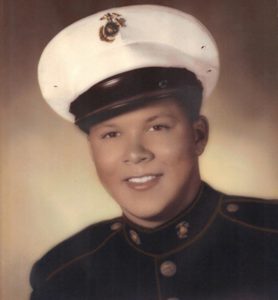 Otis, a Wampanoag tribal elder, grew up on Martha’s Vineyard and enlisted in the United States Marine Corp at the age of 19. He served in the Korean War; he was honorably discharged in 1955 coming home with many honors. His Purple Heart and Good Conduct medals were two of his proudest accolades.

Upon his return from Korea, he worked for Goodales Construction and Olsen Brothers as a machine operator. In 1970, Otis moved his family to Lakeville, Massachusetts, to begin his career at UPS. In 1975, he moved back to Martha’s Vineyard and became one of the two UPS drivers on the Vineyard. He was loved by his customers on his up-Island route and made many friends over the years. He retired from UPS in 1995, and he and his wife Barbara split their time between their home on West Spring Street in Vineyard Haven and in Hollywood, Florida.

Otis loved to hunt! Whether it was goose, rabbit, or deer, he enjoyed it all. He shared many hunting seasons with his brother Ronnie, and the Pachico, Ferreira, Canha, and Silvia families over the years. His hunting wasn’t limited to Martha’s Vineyard, he also hunted with Vincent (“Cuddy”) Lopez from Mashpee, and in upstate New York and Maine with Freddie Ferreira. Lobstering alongside his dear friend Pat Jenkinson was one of his favorite pastimes. Hosting a traditional clambake surrounded by family and friends brought him much joy.

After his wife’s death, Otis moved back up north to Taunton, Massachusetts, with close family friend Jimmy Kelly. Jimmy took great care of Otis and his dog peanut, and Otis’ family will be forever grateful for this.

A graveside service will be held on Thursday, August 5, at 11 am at the Oak Grove cemetery in Oak Bluffs. It will be officiated by Rev. Vicky Hanjian, with military honors provided by the Veterans of Martha’s Vineyard. Visit chapmanfuneral.com for online tributes and information.