Dr. Gregory Sullivan, M.D., FACC, of Edgartown, Mass., longtime former resident of Upper Montclair, N.J., born March 6, 1940, passed away peacefully in his sleep on the morning of July 26, 2021, at his farm on the Island of Martha’s Vineyard. 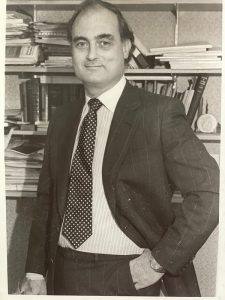 Beloved husband, father, grandfather, friend, and healer to thousands over a 53-year medical career, Greg was born to Frank and Lucy in Jersey City and raised in Rutherford, N.J. He met Gene Hejke as a child, and they would later go on to be husband and wife for almost 55 years.

Greg attended St. Peter’s Preparatory School in Jersey City, graduating in 1958. He then matriculated at Georgetown University and studied classics as part of the class of 1962, followed by NYU Medical School class of 1966.

As a physician, he specialized in cardiology and was at the forefront of interventional cardiology in New Jersey for more than a half century. He was a pioneer of angioplasty, which revolutionized non-surgical cardiac intervention. He helped found a major heart surgery center at Passaic General Hospital, where he became Chairman of Cardiology, and the Head of the Cardiac Catheterization Laboratory.

He married in 1966 and began a family immediately. He served as a Major in the U.S. Army and was stationed in Korea from 1970-1971. Both he and Gene developed passions there that influenced the rest of their lives – including a love of travel with friends and period Chinese porcelain – which ultimately blossomed into The Ivory Bird Antiques on Bloomfield Ave. in Montclair, a business Gene then operated with Mary Heyman for 42 years. Upon returning from Korea, the family settled into their home for the next 47 years in Upper Montclair.

In the early 1980s, the family’s love affair with Martha’s Vineyard began, and ultimately Greg and Gene would retire there, surrounded by their large family. Inspired by their travels, they created formal gardens at their properties. In collaboration with their dear friend, the late Michael Faraca of Avant Gardener, their creations were published in several Vineyard gardening books. Their compound, Sweetened Water Farm, with five acres of gardens, remains under cultivation as a testament to this pursuit of beauty in nature.

Greg will always be remembered by those who knew him as a dedicated family man, and a man of great knowledge in a wide variety of subjects spanning Asian art, science, politics, biography, religion, history, and vocabulary. Over more than a decade, he and Gene hosted a monthly great books symposium with their dear friend, Professor Theo Theoharis of Cambridge, Mass. He will be remembered most by family and friends as a man with an extraordinary generosity of spirit.

He is survived by his wife Gene, his children Gregory, Brendan, Jared, Alexandra, Tara, and Natasha, 15 grandchildren, and many dear friends. A funeral Mass will be presided over by Monsignor Robert Sheeran at Saint Elizabeth’s Catholic Church in Edgartown at 11 am on Saturday, August 7, followed by an interment at Sacred Heart Cemetery in Oak Bluffs, Mass.