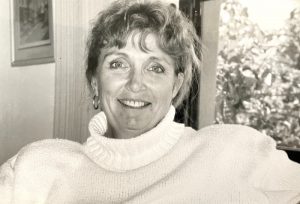 Simone was born on October 28, 1942, at Fort Jay on Governors Island (Manhattan), N.Y., to Valmore and Lorraine (Meunier) Bergeron while Val served in the Army. Val and Lorraine brought her to the Vineyard in 1946, and they opened one of the first Volkswagen dealerships in America in Oak Bluffs.

Simone grew up and went to the elementary school in Oak Bluffs. She attended high school at The MacDuffie School for girls in Springfield, then earned her B.A. and master’s degree in education from Boston University. She taught for many years in Newton and then in Edgartown, Mass.

On August 12, 1967, Simone married Terry McCarthy and moved to the Vineyard in 1970. Terry was elected State Representative from Dukes County and was in Boston much of the time. Simone became the heart and soul of the family while he was away. She was the Mother, Father, disciplinarian, and a loving guide for morals and work ethic. Judging by the results, she did a helluva job.

She and Terry started Dockside Marketplace and Marina in 1980 in Oak Bluffs, and they ran it until 2013. During that time, Simone mentored many Island children who worked for the business.

Simone began painting as a way to spend time with her mother, and found that she had an exceptional talent and passion for art. She went on to win awards and she delighted friends with her extraordinary ceramic pieces.

She was also an avid music lover and known for her infectious smile and kind, compassionate spirit. One of her best attributes was her delicious sense of humor, which could often be bawdy.

Despite contracting Lyme Disease in 1976 (which was left misdiagnosed for years), she raised a family while suffering from this debilitating scourge. To ease her suffering, the family began wintering in Naples, Fla., and came back for summers to run Dockside. The Lyme Disease continued to plague her, and it ultimately crossed the brain barrier, which eventually caused her death.

Simone was preceded in death by her father, Valmore, and her mother, Lorraine. She is survived by her husband of 54 years Terry McCarthy, her children Gatia (Scott) Kampmeyer, Jin (Caroline) McCarthy, Jeremiah (Catherine) McCarthy, and David Perry, and her 9 grandchildren: Patrick, Andrew, and Meghan Kampmeyer, and Kyle, Sean, Leah, Katie, Evren, and Gannon McCarthy.

A memorial service and Mass will be held at the Tabernacle in Oak Bluffs on Thursday, August 12, 2021 (Terry and Simone’s Anniversary), at noon.