The daytime sound of August, cicadas’ rattling crepitations, has filled the air in the last week or so. Their shed exoskeletons startle when found clinging to twigs and fencing. The evening meadowsong begins at sundown, but will continue to swell until it reaches crescendo later in September.

The way to maximize a small garden is to view it on end, foreshortened, as opposed to spread out horizontally. The scent of August in gardens is of oriental lilies and phlox. Together these two blend beautifully and are eagerly anticipated, along with dahlias. Lilies are a one-time extravaganza; but phlox, accentuated with well-placed dahlias, bloom and re-bloom over an extended period, mainstays into fall.

During the last 35 years there have been breakthroughs in breeding disease-resistant phlox cultivars and hybrids that are able to perform well without coddling, heralded by the introduction of ‘David,’ the white, mildew resistant phlox. Since then, they have become known collectively as border phlox, reflecting the interbreeding of phlox species, P. maculata, P. divaricata, and P. paniculata (among the more than 60 other native North American phlox species) used to produce them.

Several breeder’s series to look for with respect to healthy plants are the ‘Flame’ series from Bartels/Dummen Orange in the Netherlands; the ‘Top Shelf’ compact P. paniculata series introduced by Darwin Perennials/Ball; and the ‘Fashionably Early’ series from Walters Gardens.

Summer blooming phlox, while tolerating some shade, are plants for sunny borders; mind the deer. Daylong sun, well-drained fertile soil, and adequate moisture are the ingredients. Division may be in spring or fall; phlox repays the effort.

As prime pollinator attractors, it is unsurprising that phlox reseed prolifically. Deadheading helps to control seedlings, which do not usually come true from parent plants.

Hitting the (zucchini) wall?
When zucchini are coming thick and fast, having another good recipe to utilize the glut is handy. Using them in their infant and toddler phase (faintly cannibalistic sounding?), Marinated Zucchini heads them off at the pass.

Mix in a small bowl 3 Tbsp. olive oil, 1 Tbsp. red wine vinegar, as much garlic as you like (1 to 5 cloves) finely minced, and salt and pepper; set aside. Mince a handful of basil leaves finely.

Slice in half lengthwise about half a pound of very small zucchini, topped and tailed. Brown them in batches in 2 Tbsp. olive oil in a skillet over medium high heat, 2 to 3 minutes per side. Remove to a shallow dish, sprinkling the browned zucchini slices with salt as you do so. Pour the vinaigrette over the zucchini and add the basil; toss gently in the dish and let sit about one hour.

Serve as an appetizer, add to salads, or as a vegetable dish in its own right.

As with the heavy rain early Friday morning, brief periods of intense downpour are becoming the norm. Devastating flooding on multiple continents has dominated the news recently: Germany and Belgium, China, London, Utah, Nevada, Arizona, and Colorado. Causes are not really in dispute, although many prefer to disregard them.

Island towns would do well to look at zoning and building regulations for asphalt and hardscaping, to improve permeability and limit run-off. Is your handsome hardscape sending damaging water onto your neighbor’s place? Harbor towns can encourage permeable hardscape that lessens street flooding and run-off. The more rainfall the soil absorbs the better for water tables; healthy harbors, ponds, and estuaries; and shellfish stocks.

Yes, in my line of work I am well aware that Belgian block (likely produced by enslaved child labor in Southeast Asia) driveway aprons or beautiful bluestone patios are individual amenities, and even status symbols.

In devastating flooding, these amenities all become meaningless, however. Designs and products for permeable paving exist. Can Island planning boards not come up with inducements to employ them, especially as Island summers become uncomfortably hot?

On a separate but related topic: Although we are supposedly a nation of laws, we are also a nation of scofflaws! After noticing three large SUVs in the store parking lot empty but with engines running, I was impressed to learn that Wellesley, Mass., has decided to curb these entitled habits.

Massachusetts, along with many other states, has anti-idling laws for vehicles to limit exhaust fumes and heat, pollution, wasting fuel, and public safety, although the regs (Mass. General Laws, chapter 90 sec. 16A) are rarely enforced, even when there is signage. Overheating of air masses increases the amount of water vapor they can hold, leading in turn to catastrophic downpours when saturation points are reached. These were the causes of much-reported recent flooding.

Wellesley long imposed a $15 fine for idling over the time limit but has now increased the fine for a second offense to $250. Enforcement and fines with teeth in them would discourage such entitled behavior in overheated Island parking lots and in-town areas.

Heavy dews and lack of rain promote powdery mildew, although it rained so hard last Friday (1.5”) that the pole beans were washed down the bamboo poles. I spent crazy-silly time over the weekend attempting to untangle them and redirect their wayward impulses.

Various hydrangeas may be deadheaded if blooms are not aging gracefully, but as a rule, leave flowerheads on H. macrophylla. The flower bracts, and several nodes back, of climbing hydrangea (H petiolaris) may be pruned now, to keep growth snug to walls or supports.

Roses may need cutting back, water, and cleanup, as well as two cups of low number organic soil food scratched in around their bases. Plant winter squash and a row of bush beans. 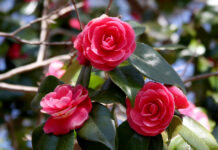 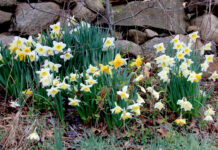