Benedict, a 5-year-old English setter, recently arrived on the Vineyard after a two-day drive from down south. “He’s usually a good traveler,” his owner said when asked if the dog’s current bout of vomiting, lethargy, and poor appetite could be from car sickness. I had never met Benedict before but as a member of the coalition of local veterinarians who rotate trying to provide urgent care for pets on the Vineyard, it was my turn to see cases that day,

Was Benny usually this quiet? I wondered as I examined him. Or was this a reflection of his illness? It’s always harder working with pets and people I don’t know. Was his owner a worrier who might be over-reacting? Or someone who ignores problems until they are severe? Should I run lots of tests? Or just provide symptomatic care as I often do in cases with vague gastrointestinal signs? I gave Benedict an anti-vomiting injection and discussed supportive care with his owner but my instincts were screaming this was more than your garden-variety upset tummy. “I think we should run blood work to evaluate Benny’s liver, kidneys, and so on,” I proposed. His owner agreed. I drew blood, then sent them on their way, saying I would call later with test results.

An hour later, tests completed, I started leaving urgent messages on their voicemail. Benedict had some kind of severe liver disease. In such a young dog, especially considering the sudden onset, the most likely causes were either a nasty infection or ingestion of some sort of toxin. I made a  list of everything I could think of that could damage his liver, reminding myself to include things we might not typically see on the Vineyard but that Benedict could have been exposed to back in Dixie three days ago. Possible infections included leptospirosis, salmonellosis, canine adenovirus-1, and any of a number of other bacterial, protozoal, parasitic, or fungal diseases. Toxins? The list was even longer. Acetaminophen, nonsteroidal antiinflammatory drugs, sugar-free foods sweetened with  xylitol,  amanita mushrooms, blue-green algae, sago palms, caster beans. Benedict might even have liver cancer. All I knew for sure was he was in serious trouble and I couldn’t reach his owners.

4:00, left message. 5:00, left message. 6:00, left message. Finally at 7:00, I reached Benny’s dad. “You should head off-Island immediately. Take him to be hospitalized and have further diagnostics with one of the large specialty referral centers on the mainland,” I said. I then began to ramble through the differential diagnosis list, until his owner interrupted to say there was a possibility Benedict was exposed to blue-green algae in a pond back home a few days ago. “But he swims in those ponds all the time, no problem,” the owner protested when I reacted with alarm.

Blue-green algae. Technically not algae, these are prokaryotic unicellular organisms that use photosynthesis to make chlorophyll. The scientifically correct name is cyanobacteria. They live in fresh, brackish, and salt waters worldwide. Despite the name, the colors created by thousands of different species of cyanobacteria can range from green to pink to red. Some are toxic. Some are not. And you can’t tell which are which by just looking at the water. Toxic and non-toxic strains can exist together in the same body of water. The degree of danger posed to people and pets may change as the ratios of these different strains change depending on environmental conditions. A pond that is safe today may be dangerous tomorrow.

In people, exposure can cause skin irritation, hay fever-like symptoms, respiratory and gastrointestinal signs, but only rarely death. It’s usually a much bigger problem for dogs. First of all, dogs are less squeamish than people about diving headlong into scummy, slimy ponds. Dogs are more likely to ingest contaminated water, either drinking intentionally or swallowing inadvertently while swimming. Some forms of cyanobacteria produce toxins that affect the nervous system while others produce toxins that damage the liver. Signs vary depending on which strains are present and may include vomiting, diarrhea, drooling, weakness, paleness, anxiety, staggering, tremors, seizures, trouble breathing, bleeding disorders, liver failure, shock, and coma. Some dogs die acutely within hours of exposure. Others have a slower onset of signs. Some make it through the initial period with only mild signs, then seem to improve, only to go into fatal liver failure a day or two later.

This is what we think happened to Benedict. Sure, he had swum in those ponds before with impunity, but maybe an environmental shift changed the situation. Did his last swim before heading north expose him to a whopping dose of cyanobacteria toxin? Benny had seemed sick, then rallied for a day or two. By the time he arrived on the Vineyard, he was in liver failure. Benedict’s condition continued to decline. He died several days later.

If you haven’t heard yet, Chilmark health agent Marina Lent recently took a water sample from Squibnocket Pond. Analysis revealed elevated concentrations of cyanobacteria. The Chilmark Board of Health has closed part of Squibnocket Pond and posted a warning sign at the boat launch making it off limits to swimming, wading, kayaking, pets, fishing, and drinking. Unfortunately, dogs can’t read, and dog owners may not understand the severity of the danger. Now hear this. There is no antidote. No cure. Exposure to water contaminated with blue green algae can be fatal to your pet. Here’s how the United States Environmental Protection Agency recommends you protect your pooch. First, spot the algae. Keep pups away from water that looks slimy or foamy, or has scum or mats on the surface. Avoid water that has a weird color, especially if it looks like paint floating on the water, and/or a stinky odor. Pay attention to posted signs and take them seriously. If despite your best efforts to keep him safe, your dog does get exposed, put on rubber gloves and protective gear and bathe him thoroughly. Then call your veterinarian. 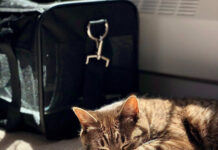 Visiting Vet: The cat and the carrier

Visiting Vet: Fear-biting and ways to address it 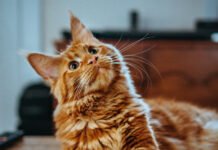