When someone mentions a bike ride on the Vineyard, images of leisurely trips to South Beach or Alley’s General Store come to mind. Rarely does one think of beginning a 1,600-mile journey from the Island to Wisconsin — unless you’re Mark Scotch.

Scotch is the founder of the Organ Trail, a campaign to promote kidney disease awareness through long-distance bike rides. The Vineyard to Wisconsin trek is Scotch’s second Organ Trail trip. The first was completed in May, and was a 1,500-mile ride from Madison, Wis., to Natchitoches, La..

Scotch was joined by five-time Ironman triathlon finisher Steve Wilson, who has also donated one of his kidneys. Wilson will bike with Scotch to New York.

Scotch gathered with a group of other donors as well as current and former dialysis patients at the Martha’s Vineyard Hospital’s healing garden for a small sendoff ceremony Sunday.

The Organ Trail was born in early 2020 after a chance meeting between Scotch and Hugh Smith, a 56-year-old former professional jockey. The two men met at Cane River Brewing in Smith’s hometown of Natchitoches. During their conversation, Scotch learned that Smith had damaged his kidneys through significant ibuprofen use to combat his injuries as a jockey. In his later life, Smith experienced renal, or kidney, failure, and was put on peritoneal dialysis treatment for 10 hours every night.

When healthy, a person’s kidneys clean their blood. Additionally, kidneys make hormones that keep bones strong. When kidneys fail, a person needs either a kidney transplant or dialysis treatment.

Scotch decided he wanted to donate his kidney to Smith, and by August 2020, the two men had gone through extensive medical testing and screening. While Scotch wasn’t a compatible match for Smith, he was able to become a “voucher donor” through the National Kidney Registry Voucher Program. This allowed Scotch to donate his kidney to someone in need and name Smith as a beneficiary, which moved Smith up higher on the National Kidney Registry priority list.

In February, Smith received a kidney from Southern California. Both men have resumed healthy and normal lifestyles.

An emotional Scotch spoke to the crowd Sunday and recounted the story of meeting Smith, shared his first Organ Trail journey, and thanked his wife Lynn for her support. “We learned that 13 people die every day waiting for a kidney. I just felt we had to try and get the word out,” he said.

The Island’s hospital opened its dialysis unit in 1987. Currently, the hospital’s dialysis clinic has 10 year-round patients and around 10 more seasonal patients. According to hospital president and CEO Denise Schepici, the hospital’s nurses have provided 885 treatments this year. Eight Island residents have had successful kidney transplants since the unit was opened in the 1980s. There are three hospital patients on the transplant list. “Many of us here today have been directly or indirectly been affected by this terrible disease,” Schepici said at the gathering.

With about 100,000 people on the waitlist for a kidney transplant and 12,000 donors nationwide, wait times can take years.

Ned Brooks, the founder and CEO of the National Kidney Donation Organization, also spoke. Brooks was one of 11 people at the gathering Sunday who had donated one of their kidneys. “It’s a real joy for us, as the largest living donor advocacy group in the country, to do work like this, to get to see you folks,” Brooks said.

Anna Truckey Davies, the nurse director of dialysis at the hospital, joined Tim Defelice, a dialysis patient, to speak about the difficulties a person experiences while on dialysis.

“I’ve been with Tim throughout his journey, about two and half years,” Davies said. “Tim is with us three times a week, and sits in the treatment chair four hours at a time. Then there’s your mental prep time before and afterward, and often after treatment you don’t feel good.”

Davies added that nurses have been getting recognition for being heroes, but she said the real heroes are the patients. “He’s my hero,” she said of Defelice.

Gabriel Garcia, an infection prevention manager at the hospital and former dialysis patient, said he was in dialysis for four years before receiving a kidney transplant. His experience with kidney disease led him to a career as a nurse.

“Thank you … for donating part of you to become part of someone else,” Garcia said to the crowd of donors. “It’s amazing, it’s incredible.”

Those interested in learning more or becoming a living kidney donor should visit mghlivingdonors.org to fill out an anonymous questionnaire. More information can be found at kidneyregistry.org and NKDO.org. Scotch’s journey can be followed at theorgantrailhm.wordpress.com. 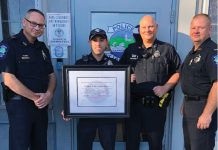