Karel O. Mattison of Edgartown and Vero Beach, Fla., died peacefully on Oct. 3, 2021, at the age of 80, due to heart failure related to her battle with cancer. 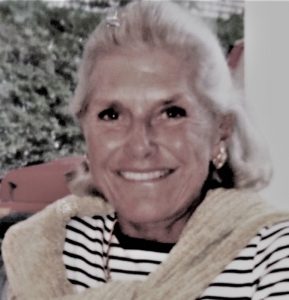 Born on June 16, 1941, the only child of Delphine Bentkamp and George Oliver, Karel grew up living with her mother and grandparents on an estate overlooking the Hudson River. She enjoyed a wonderful childhood full of pets, animals, and travel. Through her father, a professional polo player, she became an accomplished equestrian.

Karel attended the Marymount School, and was graduated from Vassar College in 1963. She married Mark H. Mattison in 1966, and they raised their three children in Indiana and New Canaan, Conn., spending magical summers in Edgartown. Karel was a devoted mother, and later, grandmother.

She held numerous volunteer positions in the schools, and was always the first to be involved or help when needed. During summers, and later when she had retired to the Vineyard, Karel continued her volunteer work, serving as president of the Chappaquiddick Beach Club, on the boards of the Boys and Girls Club and the Edgartown Golf Club, and leading tours at Polly Hill Arboretum. She was also a member of the Edgartown Yacht Club. Karel was an avid golfer and enjoyed playing bridge, walking on the bike path, and spending time at the beach; however, her greatest passion was spending time with her seven grandchildren.

Karel lost her husband, Mark, in 2017, but is survived by her children, Delphine Morton, Graham Mattison, and Alissa Mattison-Nosal; and her grandchildren, Oliver, Brenner, Ridder, and Hunter Morton, George and Caroline Mattison, and Katie Purda; as well as by her sister, Mimi Oliver Boyle.

A memorial service will be held in Edgartown in late June 2022.

In lieu of flowers, the family asks that donations be made in her name to the Animal Shelter of Martha’s Vineyard, P.O. Box 1829, Edgartown, MA 02539, or online at animalshelterofmv.org.