Richard Yerkes (“Chip”), 75, formerly of Edgartown, succumbed to a two-decade battle with early-onset Alzheimer’s at sunset on Sept. 17, 2021, at Woodridge Nursing Home in Berlin, Vt. He died peacefully, with family by his side. 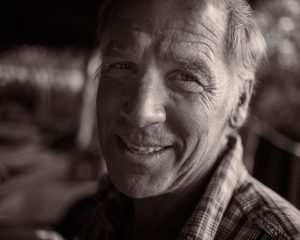 Chip was born on August 20, 1946, in West Chester, Pa. He attended Westtown School. True to his Quaker upbringing, he became an advocate for peace and kindness throughout his life. He was a conscientious objector during the Vietnam War, and performed his service as a medic for two years at NYU Hospital in New York City.

In the winter of 1968, Chip moved with his parents and siblings to East Burke, Vt., to transform the Darling Farm into the well-remembered Darion Inn (currently the Inn at Mountain View Farm). Chip wore many hats, working as a carpenter, bartender, trail groomer, and host.

In the early ’80s, Chip went on an extended adventure to Texas, where he worked as a scuba diver and underwater welder on oil rigs in the Gulf of Mexico. He competed in Ironman triathlons for fun, and once attempted to windsurf from Texas to Florida to save on gas. Back on the East Coast, he traveled to Martha’s Vineyard to build a house with Charlie Chapman. Martha’s Vineyard soon became his home. He worked as a bartender and contractor, and eventually purchased and renovated his own inn, the Jonathan Munroe House, on Main Street in Edgartown.

The renovation and opening of the Inn was the culmination of his life’s work — bringing together his children and great friends to skillfully reinvigorate a historic home and shine its original beauty. Chip found great joy in being an innkeeper, entertaining guests from far and wide for more than a decade. He caught up with friends for a bottomless cup of morning coffee once guests had finished their eggs Benedict and had left for their daily adventures, which he often helped them plan, opening up the lesser-known beauties of the Island he loved.

Chip lived a full and active life. He was passionate about the outdoors, and managed to bike, swim, ski, run, or canoe daily — no weather too poor, no job too important. He’d battle the whitecaps on Great Pond by canoe to get to South Beach for a long swim, windsurf in any body of water he could, and take a jaunt through Sheriff’s Meadow for a quick break between jobs. He was his best, and one, with nature.

Chip found and could draw out beauty and humor in those around him. Always quick to lift you up with a compliment or a hoot of laughter, he could make you feel like the best storyteller or most beautiful person in town. He was in awe of the interconnectedness of people and experiences, befitting the innkeeper that he was. His kind spirit and generous heart could be felt immediately in his presence, even in his last days.

Chip was a loving father, passing his love of the outdoors and ideals for peace and justice to his children, making the long trip from Martha’s Vineyard to Vermont to support their school, athletic, and social endeavors.

Chip is survived by his sister, Jo-Ann Golden, and her husband Larry Golden of Lyndonville; the mother of his children, Doreen Yerkes, of East Burke; his son, Jamie Yerkes and wife Polly Yerkes of Kirby, all of Vermont; his daughter, Julie Yerkes and husband Patrick Taylor of Concord, N.H.; his nephews, Ricky Golden, Larry Golden, and Chris Hibshman; his niece, Carrie Hibshman Tomczyk; and his grandchildren, Ruby, Gus, and Lila Yerkes, and Mika, Zadie, and Meret Taylor. He was predeceased by his father, Richard (“Dick”) Yerke: his mother, Marion Harmer Yerkes; and his sister and brother-in-law, Nancy and John Hibshman.

A Quaker memorial service for friends and family will be held at 2 pm on Oct. 10, followed by a celebration of life from 4 to 6 pm at the Notch House on Lake Willoughby, 5768 VT RT 5A, in Westmore, Vt.

In lieu of flowers, please consider making a donation to the Alzheimer’s Association (act.alz.org), the Harvard Brain Bank (giving.mclean.org/mclean-brain-bank), or Greenpeace (greenpeace.org).