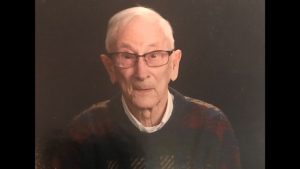 Bob was the second of three sons born to Joseph and Jessie (Richardson) Boak. He was born in Brooklyn, N.Y., on March 13, 1919, and was raised in Summit, N.J. A veteran of WWII, he served in the U.S. Army and was stationed in Africa, France, New Guinea, and the Philippines. He was discharged as a technical sergeant.

In 1948 he married Patricia Scarry, also of Summit. They built a house and moved to Basking Ridge, N.J., where they raised their family. Fifty-five years later, they moved to Hackettstown, N.J.

Bob was the founder and president of the Arbee Co., where he developed and perfected a lamination process for the preservation of books, maps, and other archives. He also patented the laminating machine that was used for the process, and eventually sold these machines to the archive departments in Ottawa, Canada, Madrid, Spain, Lagos, Nigeria, and the National Archives in Washington, D.C. Other machines went to several state capitals around the country.

Bob was a tinkerer. He loved fixing things, and the more challenging the project, the better. He had a tool for almost every need; if there was one that he didn’t have, he would create a suitable substitute. Bob was also skilled at needlepoint, and he made beautiful handcrafted jewelry, which he loved giving away to his visitors and as Christmas presents to his family.

He was an active member of Bishop Janes United Methodist Church in Basking Ridge. He was very involved in the church’s annual Christmas tree sale, with the ROMEOs, a retired men’s breakfast group, and for 25 years, he managed the church’s Evergreen Cemetery.

He was predeceased by his beloved wife, Patsy, of 65 years. After her death, Bob moved to the Vineyard as a full-time resident. Prior to that, he had summered every year of his life at the family’s cottage, known as Boak’s Bluff, on Lagoon Heights, with the exception of his 4½ years in the Army.

He is survived by his sons, Robert Jr. of High Bridge, N.J., and Peter of Oak Bluffs; and by three generations of nephews and nieces.

A graveside service will be held at a later date in New Jersey.