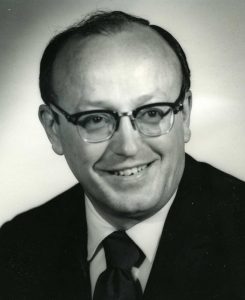 Born in West Hazleton, Pa., to Wilson and Eva Hill, Donald attended Pennsylvania State University, and earned a degree in chemical engineering in 1948. While serving in the Army between 1950 and 1952 at Fort Dix, he met and married the love of his life, Mary Ellen, to whom he was married for more than 70 years.

Donald had a successful career with Mobil Oil Co., starting in Paulsboro, N.J., then New York City, and later in Fairfax, Va. He and his wife were long-term residents of Woodbury, N.J., and summer residents of Martha’s Vineyard. After retiring from Mobil, Donald designed and renovated the family home on the Island, moving there full-time in 1991.

He had a puzzle-loving mind, a bucket hat for every occasion, and a list for everything. Donald taught himself to swim in Lagoon Pond with a Red Cross book he had checked out of the library, and later he learned how to sail in a similar way. He loved nature, and he taught his family to row, canoe, back up a trailer, and pitch a tent. He introduced us to the Island, a place that we all treasure for its uncommon beauty.

Donald is survived by his devoted wife, Mary Ellen (LaDow) Hill; his children and their spouses, Elizabeth and Norman Lehrer, David and Kelly Hill, and Mary and Jim Long; his grandchildren, Emily (Lehrer) Pierce, Benjamin Lehrer, Miranda Hill Jacob, Michael Hill, Megan Long, and Delaney Long; and his great-grandchildren, Oakland Hill and Julien Lehrer. He is predeceased by his sisters, Doris Hill and Gladys (Hill) Sachs.

Donald will be remembered as a thoughtful, logical, and kind man who served as Lagoon Pond treasurer for many years, and as a tax aide and Hospice volunteer. He belonged to the 1st and 3rd Club, and was a member of the United Federated Church of Edgartown. He loved his wife and family dearly, and was incredibly proud of his children, grandchildren, and great-grandchildren.

A private service is being planned. Visit chapmanfuneral.com for online tributes and information.