Even more impressively, they won the trophy without their top runner, Zach Utz.

“It was a good day because the guys kind of rose up. They knew they would be missing Zach, and moving the event ahead [originally scheduled for Oct. 23] throws off your timing and preparation,” Coach Joe Schroeder said. “The guys ran tight. Looking forward to the next couple of weeks. The kids were pumped, so that’s a good thing.”

Four Vineyarders ran in the girls varsity race. Wren Christy finished second (19:26) after a close battle with Barnstable’s Ava Bullock, who pulled away over the final 800 meters. Alexa Schroeder placed seventh overall for MV. Eloise Christy, racing in just her second event of the season, and Sara Creato also competed for the Vineyarders, but their places and times were unavailable at press time.

Linus Munn posted the other strong result for the Vineyarders, winning the boys JV race by more than 30 seconds.

Next up for the Vineyard harriers is the Coaches Invitational on Saturday in Wrentham.

The Vineyarders played for the Massachusetts state championship on a cool and windy Tuesday afternoon at challenging Shining Rock Golf Course in Northbridge, and came in seventh among 12 schools. Dover-Sherborn won the title with a 344.

“The kids did very well. I was quite pleased,” Vineyard Coach Doug DeBettencourt said. “It was very difficult and very windy. [The course] was set up very hard. It’s a ‘target’ golf course, particularly off the tee.”

The top four of six scores counted toward the final team total of 367. Richie Combra led the Vineyarders, and tied for 12th in the individual standings with an 85. “A really good score for that course under those conditions,” DeBettencourt said. Jake Glasgow shot 90; Ryan Harding, 95; and Jacob Silvia, 97. Rounding out the team were Nick Ben David (98) and Cam Napior (102).

“I was really pleased with how hard they hung in there, and a seventh-place finish is excellent. I almost think that we made the finals a year early,” Coach DeBettencourt said.

With almost the entire roster slated to return next year, the future looks bright for 2022. “I had nine players start for a varsity match this year, and eight are returning. So next year looks pretty good,” DeBettencourt said.

Boys soccer falls to Whalers, 1-0, but qualifies for state tournament

The Vineyarders played at Nantucket on Sunday hoping to close out the regular season on a high note and avenge a 4-2 loss to the Whalers in Oak Bluffs on Sept. 30. Nantucket pulled out a 1-0 win, but the good news is that the Vineyarders still qualified for the Division 3 state tournament as the 19th seed, and will play at No. 14 Tantasqua Regional in Fiskdale on Thursday afternoon at 4 pm.

MV had to take on their island rivals without their starting goalkeeper, Matheus Rodrigues, and leading scorer, Kaio DaSilva. Ryan Koster put on the keeper’s jersey and did an outstanding job in net, but the Vineyard offense couldn’t find their scoring touch.

“That was a really frustrating day for me. We didn’t play very well,” Vineyard Coach John Walsh said in a phone call with The Times. “Nantucket is a very tough team to play, especially over there. Their field is really, really small, in similar condition to ours. It’s hard to play our passing game. It was chaotic — offense without purpose.”

Arthur DaSilva had the best Vineyard chance in the first half, but shot wide on a breakaway, trying to kick with the outside of his right foot.

Ryan Koster made two brilliant saves in the second half, diving for one and parrying another over the crossbar. “He was fantastic,” Walsh said. “He’s really good with his feet. We use him as the 11th person on the field. He can kick the ball 70 yards off the ground.”

Nantucket gave the Vineyarders the most trouble with a series of free kicks, and finally converted from one later in the second half. Treyce Brannigan approached the ball and gave way to David Lemus-Castro, who played a short pass, and Brannigan drilled a low, hard shot inside the left post off the fingertips of the diving Koster.

Filippo Mucci later earned a Vineyard penalty kick, getting brought down after gathering a through ball and splitting a pair of Whaler defenders, but the Nantucket keeper made the save. “He hit a penalty kick that he would like to have back,” Walsh said. “The Nantucket keeper guessed right and made a relatively routine save, but I have a lot of confidence in Filippo. He hits the ball really well.”

Try as they might, the Vineyarders couldn’t find the equalizer. “We’re close, we generated enough opportunities to win the game,” Coach Walsh said. “Unfortunately, we just haven’t been finding the back of the net. We’re getting to the places where we should be scoring from, but we’re not getting the quality ball to create the finish, the last touch.”

Now, the Vineyarders (7-7-3) have four days to regroup, get healthy, and head for the playoffs.

The MVRHS girls soccer team, victorious over Nantucket on home turf earlier this season, lost a seesaw 3-2 battle to the host Whalers on Sunday.

“The girls played good. It was kind of a back-and-forth battle,” Vineyard Coach Rocco Bellebuono said. “They scored their third goal with 15 or 20 minutes left in the second half. We did a good job of controlling the game, and had our opportunities.”

Nantucket goalkeeper Macy Crowell saved a penalty kick in the first half, and was a big factor in the Whalers’ favor.

“She had a fabulous game on Sunday,” Bellebuono said of Crowell. “I think we probably would’ve won if they had had another goalkeeper. She was steadfast and strong, and made a number of good saves.”

Paige Malowski put the Vineyarders up 1-0, fighting the ball in through a jumble of players, and Wadeline Florime-Hall added the second score to make it 2-1 for the visitors. The Whalers equalized again before halftime.

In addition to his two goal scorers, Coach Bellebuono was impressed by the play of C.J. Walsh and Josie Welch.

“C.J. Walsh had a great game. She came into her own in the second half of the season. She’s tapped into her strengths and played to what she’s good at, and focused on that.”

As for Welch, Coach Bellebuono said that she had “another strong game,” but she was getting frustrated with connecting her passes, particularly in executing the fine art of slotting a through ball between opposing players. “She can see passes that others can’t,” Bellebuono said. “Those passes are difficult to make because they are going through tight spaces and the other team is leaving a little slot … You have to keep doing it, and it will come. If you don’t do it, you won’t be successful.”

The Vineyarders finished up at 5-10-1 for the season, and Bellebuono, head coach since 2013, was pleased with what he saw. “This was the best season since I’ve started coaching. It’s a solid group,” he said. “We’re only losing one senior [Isabelle Murphy], we’ll be picking up a couple of freshmen who will be promising, and we have the continued growth of the JV team.

“I’m feeling pretty excited about the prospect of next season. We’ll be more competitive next year than we were this year, we’ll have a strong leadership group, a nice group of seniors who are mature and have a good perspective of where we are as a team, and they’ll bring the other girls along with them.” 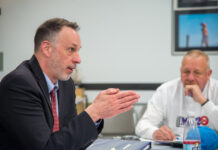