A while back I wrote about my fear of puff pastry; today I add to that list: the kitchen mandoline, that incredibly sharp apparatus that enables us to slice things so thin that you can see through them. My son James contributed the mandoline to our admittedly small kitchen gadget collection, and he swears by it. He also required several stitches on the tip of his middle finger eight years ago, after using one. Now, he cautions me every time I consider making pickled red onions or those beautiful shaved chocolate curls. But he always adds: “Go ahead, mandolines are awesome.” So I decided to throw caution to the wind and try using one for a delicious salad recipe.

I like to Google things on the weekends, and a couple of weeks ago I was doing my usual search for “easy healthy salads” when I stumbled upon this recipe for Shaved Brussels Salad. I loved everything about it — the lemon juice and olive oil dressing, the pine nuts, the dried cranberries. The only ingredient I needed to buy from the grocery store was chives, and this proved a dismal failure because what I purchased had already wilted by the time I took the mandoline down from the top shelf in the cupboard. I knew in order to make this recipe properly, I must use the scary mandoline to shave the Brussels sprouts.

I took that sharp-bladed mandoline on and by holding each Brussels sprout by its hard little core, I was able to slowly shave enough (4 cups) to make this salad. I’m pretty certain I wasted half of each sprout because I was afraid to let the blade get too close to my fingertips. But I did it, and I have to say the end result was as tasty as I thought it would be. My only takeaway was that I think I’d up the dressing amount a little, but that’s only because I tend to go heavy on the dressings and sauces in my recipes. (Before my palate was fully mature, I was one of those people who grabbed 42 ketchup packets at McDonald’s every time I ordered fries.) My other snafu was that I used chopped red onion rather than chives, because as I noted earlier, mine were unusable, and I do love red onions. You go ahead and try it with chives, though; I’m sure that’s good too. Don’t forget the mandoline.

¼ cup pine nuts, toasted (I did not toast mine because I’m lazy.)

Shave the Brussels sprouts first, to get it out of the way. Then mix the olive oil and the lemon juice and let it sit while you chop the chives (red onion), and add the rest of the ingredients to the shaved Brussels sprouts. Toss it all together with the dressing, and let it sit for maybe 30 minutes. Drizzle a little more olive oil on it, and toss again before serving. 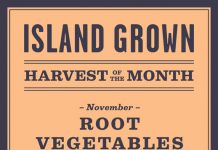 Harvest of the Month: Root Vegetables