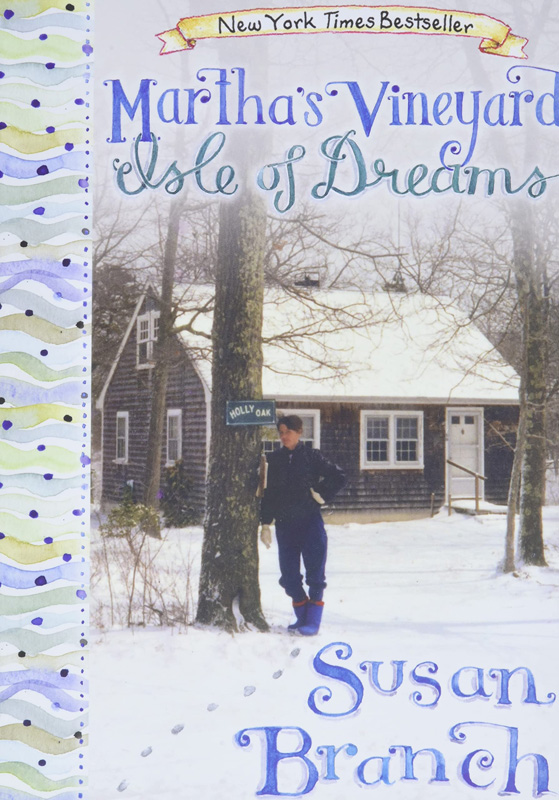 Susan Branch’s memoir “Martha’s Vineyard: Isle of Dreams” is like reading a close friend’s diary — one who has an inventive, artistic bent and insightful mind. The book is offered in the Oak Bluffs library’s upcoming book club, prompting me to give it a read.

The physical book itself is unusual. Picking it up, I couldn’t believe how heavy it was, so I immediately flipped through it. The pages are unusually thick, reminding me of watercolor paper. The illusion is enhanced by Branch’s unique watercolor illustrations, sprinkled throughout the pages. The text font is likewise reminiscent of someone’s handwriting rather than typeset. The accompanying hand-colored capitalized letters help the tome create an alluring personal version of an illuminated medieval manuscript. She includes inspirational quotes from authors such as Ranier Maria Rilke and Charles Dickens, musicians such as the Carpenters and the Beatles; famous people including Rumi and Hellen Keller; and great thinkers like Albert Einstein.

But the first one is in the preface: “To live is to be slowly born,” by Antoine de Saint-Exupéry, and it’s apt for the way her journey unfolds. The tale begins with Branch arriving in the Vineyard as a planned temporary escape from a broken heart from the end of her marriage in California, 3,000 miles away.

She writes: “I’d always wanted to see what it was like to live where there were seasons, so I’d decided to escape the pain of my breakup with a big change of subject (for the previous six months I’d done nothing but think about it, talk about it, hear about it, and cry about it, ad nauseam, to the nth degree …) and go stay on the East Coast, on the Island of Martha’s Vineyard (a place so small that back in the early ’80s when you mentioned it, most people would say, “Where’s that?” … I’d go from winter, to spring, to summer before I went back …”
As you’ll discover, Branch instead “accidentally” bought a tiny cottage in the woods. And while she keeps up with her California family and dear friends, and even her ex (an interesting, evolving subplot), Branch eventually lays down roots in what becomes her permanent Island home.

She spends a great deal of time alone building a cozy home, adopting kitties whom she adores — and we can’t help but come to love — and exploring the Island’s beauty. There are plenty of photos (as well as vintage postcards) of familiar icons, whether it’s the West Chop Lighthouse, the ferry, or the Black Dog tavern. Branch relishes the terrain and the change of seasons. Her descriptions of what it feels like to live here ring viscerally true: “It was beautiful, there were peeks of ocean around every curve; long, flat stretches of beach, charming old houses with low eaves and steep roofs and picket fences; thick tumbledown rock walls; ancient graveyards, and the woods … I’d never seen dense woods like these … In the mist, the woods around Holly Oak [her cottage] looked haunted. There were rabbit warrens, squirrel holes, owls’ nests, and small, scurrying woodland creatures. It occurred to me that elves could easily be living in these woods.”

She tells her story with humor and honesty, and we follow Branch as she travels a road of self-discovery and growing confidence. A large part of it has to do with the birth of an idea of doing a handwritten and watercolor-illustrated cookbook. Nicely, along the way, Branch treats us to some of her treasures, like a recipe for the perfect apricot jam or popovers. She also writes extensively about the meals she cooks. One inventive dessert that caught my eye was spreading slices of watermelon with sour cream and sprinkling them with brown sugar.

As “Isle of Dreams” progresses, we follow Branch as she brings the cookbook, “Heart of the Home: Notes from a Vineyard Kitchen,” to fruition — a multiyear process during which she grows and heals emotionally. And as we come to learn, a quote by George Eliot aptly sums up Branch’s journey to self-actualization: “I desire no future that will break with the ties with the past.”

Everything about “Isle of Dreams” is homey, from its unusual visual presentation to the diary-like writing. I found it addictive, coming back each night to learn how life was unfolding for what came to feel like a good friend.

“Martha’s Vineyard: Isle of Dreams” by Susan Branch. Available at local bookstores and online, $29.95. The Virtual Vineyard Book Club at the Oak Bluffs library will meet Tuesday, Nov. 30, at 6 pm to talk about Branch’s book.