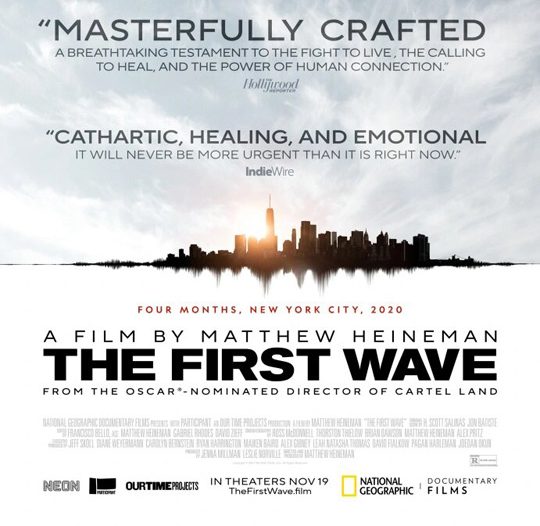 “The First Wave,” a National Geographic documentary about COVID-19, comes to the M.V. Film Center on Saturday, Dec. 4. While it might seem a film viewers want to avoid seeing, it is an important look at a subject not to be missed. Emmy awardwinner and Oscar nominee Matthew Heineman directs, and will appear after the film to discuss it.

“The First Wave” looks at the first four months of COVID-19 from the intimate viewpoint of two patients, and Dr. Simone Dougé, who works at Long Island Jewish Medical Center (LIJ) in Queens, N.Y.

As Dougé points out, the hospital’s patients are primarily working-class African Americans, Latinos, and other people of color. As an African American herself, she feels the connection with them. The film begins in March 2020 with Patrick, a man in cardiac arrest. Hospital workers pound on his chest to get a pulse, and succeed, but Patrick flatlines. They note the time of death: 9:01. Then the staff respect the loss with one minute of silence.

“We are battling a deadly virus,” says then Gov. Andrew Cuomo, speaking articulately to the public in the days before his accusations of sexual harassment.

Next the viewer sees Dougé washing her hands then patting her dog, illustrating her life outside LIJ. In this way, “The First Wave” uses an up-close approach to tell its story, and that is its power and poignancy. After another patient dies, the viewer watches as the doctor talks on the phone to the family and hears the screams of pain at the loss.

Viewers see NYPD safety officer Ahmed Ellis, a deeply ill patient with haunting eyes, and they wonder if he will be the next to die. Because he’s overweight and diabetic, the staff describes him as at high risk.

Viewers see Naph Jabon, whose wife is pregnant and ill with COVID, praying but feeling excited by the pregnancy, and his wife is given an emergency C-section.

The film returns to Dougé, who says, “Every second feels like an eternity.” Ellis has a persistent fever, so the staff puts him back on a ventilator, and a nurse is shown crying from grief and exhaustion. The LIJ’s CEO says, “Every day we look at death. The scary thing is that it looks right back.” A tag is placed on a dead person’s toe, and the dead are carted into a room full of dead bodies.

As “The First Wave” continues, viewers begin to see patients recover. When they get home, the neighbors cheer. In May 2020, after George Floyd’s death, a crowd chants, “I can’t breathe.” Dougé points out the connection: “When we started shouting, ‘I can’t breathe,’ I heard all the different times my patients said, ‘I can’t breathe.’”

Information and tickets for “The First Wave” are available at mvfilmsociety.com. For information on what’s playing at Edgartown Cinemas, visit entertainmentcinemas.com/locations/edgartown/.