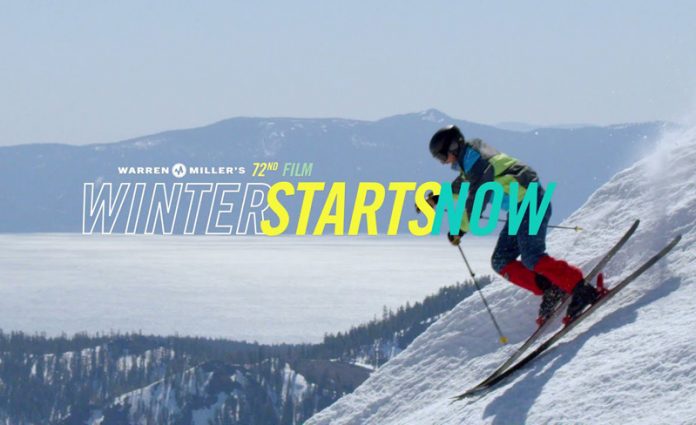 “Winter Starts Now” plays at the M.V. Film Center on Saturday, Nov. 27, for one night. It’s the 72nd annual ski and snowboard film from Warren Miller Entertainment. The film features skiing and snowboarding at Prince William Sound, Alaska, and south to Maine. Included are skiers Marcus Caston and Connery Lundin, as well as J.T. Holmes, the celebrated speed rider. Others include Madison Rose and Vasu Sojitra. As a special offering with this ode to the coldest season, filmgoers can enter into a free sweepstakes to win a grand prize ski vacation.

For Miller’s eighth film, Caston says, “I grew up watching his films. They inspired me, and I hope ‘Winter Starts Now’ inspires people to get out there and live life to the fullest.”

Along with Caston, skiers Connery Lundin, Jim Ryan, Kaylin Richardson, and Madison Rose travel from Maine to Prince William Sound in Alaska for skiing action. Prince William Sound represents a location that is entirely wilderness without any population. Maine slopes offer skiing at all levels including children and families.

Because of the pandemic, Caston was not able to go to Europe or Canada. Instead, he spent his time traveling to ski areas around the U.S. like those in Colorado and Jackson Hole, Wyoming. In addition, Caston and Lundin went heli-skiing in Alaska, getting to mountains by boat or helicopter.

“You have breakfast, then you zip off to the mountain by helicopter,” Caston said. “That’s cool, but it was interesting going to these mountains by boat. The difference is that if you go by helicopter, you can be off somewhere remote,” he explained. “And if something goes wrong, you can be transported to safety. That’s not so with the boat. If something goes wrong, it will take two days for you to come back. So you have to be more careful when you travel to these mountains by boat. The safety net is gone. It’s a bit more real.”

Caston’s favorite place to ski is Spokane, Wash., and he used to race there on Schweitzer Mountain. He says, “It wouldn’t be like this for me if there were never a Warren Miller.”

Information and tickets for “Winter Starts Now” on Saturday, Nov. 27, are available at