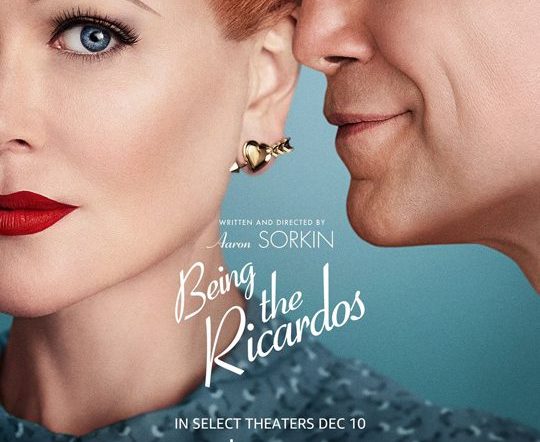 “Being the Ricardos,” a biopic about the iconic Lucille Ball and Desi Arnaz of “I Love Lucy” fame, plays this weekend  at the M.V. Film Center. The movie was written and directed by Aaron Sorkin, who won a screenwriting Oscar for “The Social Network” (2010), as well as an Oscar nomination for “The Trial of the Chicago 7” (2021).

In “Being the Ricardos,” Sorkin juggles three themes: the makeup of 1950s TV sitcoms; actors Lucille Ball, played by Nicole Kidman, and Desi Arnaz, played by Javier Bardem; and third, the sitcom characters Lucy and Ricky Ricardo. The film also uses pseudo-documentary commentators — Linda Lavin as Madelyn Pugh and Ronny Cox as Bob Carroll — along with their younger versions in the fictional story. Certainly there’s a lot of names and characters to keep track of.

In an opening scene, Pugh and Carroll discuss Ball’s being a member of the Communist Party, an accusation reported by newspaper columnist Walter Winchell. It is an issue that references Sen. Joseph McCarthy and the House Un-American Activities Committee. The committee’s controversial work led to the Hollywood Blacklist, in which more than 300 artists were targeted in studio boycotts. Ball was investigated in 1953 as part of the committee’s witch hunt, but the issue was dropped without any further accusations. Nevertheless, FBI Director J. Edgar Hoover remained suspicious and continued to keep a file on her. What comes out in the film is that Lucy (as Nicole Kidman) had checked off Communist when registering to vote in order to please her grandfather, who had helped raise her. This was historically accurate.

The movie continues with a 1950s scene that foreshadows later events. In it, Ball confronts Desi’s infidelity with a photo that turns out to have been taken the summer before and was innocent enough. The film illustrates their switching to lovemaking as an example of their devotion to each other.

“Being the Ricardos” uses weekday titles to structure one week in the show and the lives of Ball and Lucy, as well as of Arnaz and Ricky. On Monday, they are shown arguing over the script and the Communist accusation. Tuesday focuses on blocking a scene, in other words working out the actors’ movements. Ball, a genius at physical comedy, oversees a scene where the sitcom’s Lucy plans a dinner party. She has Vivian Vance (Nina Arianda), playing Ethel Mertz, and William Frawley (J.K. Simmons), playing Fred Mertz, knock each other off the bench they are sharing. In this way, the film illustrates how TV sitcoms evolved in the 1950s.

“Being the Ricardos” continues with a debate about whether to use Ball’s real-life pregnancy on the sitcom. The issue remains unresolved, with the sponsor Phillip Morris resisting use of the pregnancy as a plot point. The episodes, however, aired and were the most watched in the series at the time. Other scenes include Lucy Ricardo in Italy stomping grapes for wine, and Lucy Arnaz insisting that Desi ran the show.

The film ends with a documentary-style statement about the outcome of their lives together. Viewers may feel challenged by the shifting back and forth among the three themes mentioned earlier, but “I Love Lucy” remains such a popular sitcom that they should stick with it.

Information and tickets for “Being the Ricardos” are available at mvfilmsociety.com. Information for films playing at Edgartown Cinemas, visit entertainmentcinemas.com/locations/edgartown.