The Martha’s Vineyard Regional High School (MVRHS) girls hockey team started off the regular season with four road games squeezed into six days. Throughout the busy first week of play, the Vineyarders consistently played with the effort and commitment necessary for success even if the end result in the standings equaled one win and three losses.

The season began on Dec. 9 at the Charles Moore Arena in Orleans against the Cape Cod Furies. Izzy Blake scored the first Vineyard goal of the season and the teams were tied, 1-1, in the second period before the Furies pulled away for a 4-1 win.

“Great atmosphere over there. We were a little tight,” Vineyard Coach Geoghan Coogan wrote in an email to the Times. “Tied game through the second and then we just had a few bad bounces. First game jitters!”

Saturday at Walter Brown Arena in Boston, the Vineyarders lost to Brookline, 7-3. Again, the Vineyard effort was there but Brookline capitalized on some MV mistakes, making the most of their opportunities.

“Felt like we outshot Brookline 2 to 1, dominated most of the game but our mistakes turned into goals for Brookline,” Coogan said. “Very positive though about our effort. The results just didn’t go our way.”

On the stat sheet, Coach Coogan likes to focus on total points as opposed to goals and assists which earn one point each. “That’s important to me as I don’t like to single out goal scorers vs. the ones who get them the puck to score. A point is a point and they all help us win!” he said. Against Brookline, Lily Moran and Izzy Blake chalked up two points apiece and Caroline Kelleher and Alana Nevin each had one.

The Vineyarders had little time to regroup from the second defeat. MV skated against Latin Academy on Sunday afternoon and quickly found themselves in a 2-0 hole. But this time, Vineyard grit and perseverance paid off in a 5-4 win. Caroline Kelleher and Marin Gillis had two points each, with Alana Nevin, Izzy Blake, Lila Mikos, Savannah Meader and Olive MacPhail each earning one. Nelly Long, as she has been from the start of the season, was strong in net.

Tuesday afternoon, the Vineyarders made the short trip to Falmouth and fell to the Clippers, 8-4, a result that Coogan felt didn’t reflect the effort his charges put into the contest. “We lost 8-4 but our play didn’t mirror that score,” he said. “Our lapses turned into goals against. But we never quit, battled to the end and that’s what we have to do to get to the next level.”

For the first time since preseason scrimmages, the Vineyarders finally get back onto home ice on Saturday against Dennis-Yarmouth. The puck drops at 4:30 pm. 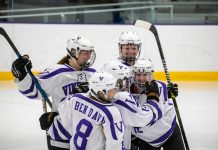 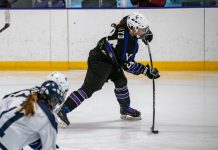 Girls hockey holds its own in C&I league