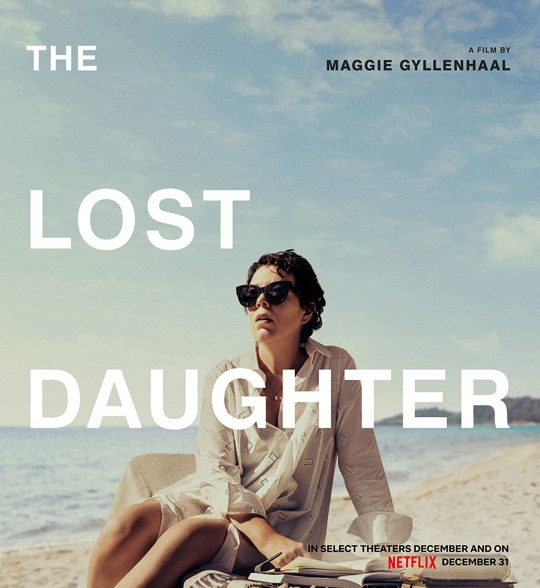 “The Lost Daughter” opens Sunday, Dec. 26, at the M.V. Film Center. Directed by Maggie Gyllenhaal, it is a deeply involving and demanding debut film. Gyllenhaal, best known as an Oscar-nominated, Golden Globe–winning actor, also wrote the screenplay, which is based on the 2006 Elena Ferrante novel of the same name. The novel is one of the celebrated Neopolitan series, in which the focus is on the relationship between Lila and her childhood friend Lenu. Like the book, the film doesn’t explore this relationship, but unlike the book, it employs an approach more suited for film.

“The Lost Daughter” stars Oscar winner Olivia Colman in a remarkable turn as Leda Caruso, a British academic on holiday from teaching in Cambridge, Mass., at the Greek isle of Spetses. Viewers first meet Leda collapsed on the island’s shoreline. The scene quickly switches to Leda driving contentedly toward her rented apartment. There she meets Lyle (Ed Harris), who carries her book-laden luggage upstairs. We see signs of Leda’s aloofness in response to Lyle’s helpfulness.

Next we see her relaxing on the beach with a book. Her solitude is interrupted by a noisy family visiting from Queens, N.Y. Soon a pregnant Callie (Dagmara Dominczyk) asks if she minds moving so her extended family can be together. Leda abruptly says no, an unconventional surprise for the viewer. But nothing about this woman is conventional.

A curious Leda watches this raucous family, in particular Nina (Dakota Johnson), an attractive young mother whose difficult child, Elena, reminds Leda of her own two daughters. The scene switches to a younger version of Leda (Jessie Buckley), whose relationship to her two small daughters is challenging and frustrating. This version of Leda illustrates her ambivalence at being a mother. Soon she will disappear to attend an academic convention, where a colleague, Professor Hardy (Gyllenhaal’s husband, actor Peter Sarsgaard), gushes with praise for her, and before long they are sleeping together. The film conveys sexual promiscuity, literal or suggested, among a number of the characters. The flashbacks can be seen as the 40-something-year-old Leda’s memories.

As “The Lost Daughter” moves back and forth between the older Leda and her younger version, it becomes clear that the older Leda has complicated feelings about her former life as wife and mother. At one point she says to Callie, “Children are a crushing responsibility.” In the meantime, the younger version of Leda leaves her children with her husband for three years to pursue a more fulfilling academic career.

When Nina’s daughter Elena disappears along with her doll, the older version of Leda is the one who finds her. But she keeps the doll that belongs to Elena, who is distraught at the loss. This episode illustrates the demands Elena places on Nina, as well as the sympathy Leda feels for this young mother. Leda throws the doll in the trash, but later retrieves it. This back and forth suggests the doll serves as an emblem of the struggle Leda feels over her rejection of her daughters.

When Will (Paul Mescal) comes into the older Leda’s life, she begins a flirtation with him, but it goes nowhere, particularly after a scene when she sees him embracing Nina. Another episode finds Lena at the movies and further characterizes her hostility toward Nina’s family. Annoyed at their disruption, she confronts them, then enlists the usher to quiet them. Angry and unsuccessful, she finally marches out.

Each of the film’s vignettes adds to an increasingly complex portrait of a woman who experiences the conflicts within conventional motherhood and acts on it. “I’m an unnatural mother,” she confesses to Nina. When Nina discovers Leda has Elena’s doll, she grabs it and stabs Leda with her hat pin.

“The Lost Daughter” ends on the beach as it began, but the conclusion provides viewers with deeper insights into female identity not often seen or described. With a powerful cast in addition, this film may well find a place in the pantheon of Oscar winners.

Information and tickets for “The Lost Daughter” are available at mvfilmsociety.com. To find the schedule of films at Edgartown Cinemas, visit entertainmentcinemas.com/locations/edgartown.