As I took a Christmas Day walk along South Beach with my Labrador retriever, I was dismayed to see signs of the unremitting beach erosion. It appears that several tons of sand have been delivered to try to mitigate the situation. Many Islanders read the “State of the Coast” report released this summer, which forecast almost 1,000 houses and 44 miles of roads are at risk between now and 2050.

On Sept. 8,you published a sobering article by Jack Fruchtman, “August’s four critical news stories,” where he reviewed the “carrying capacity of the Islands,” population issues identified by the 2020 census, the U.N. Intergovernmental Panel report on climate change, and the Trustees of the Reservation report on the eroding coastline. Despite this fine reporting, many Islanders still do not grasp the urgency of the situation. For example, our drought of 2020 went largely unrecognized by some on the Island. I would like to suggest that your paper consider a regular quarterly column, “Climate Change and Martha’s Vineyard,” which would serve to keep these issues front and center. 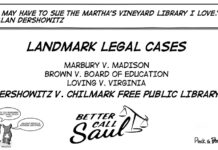