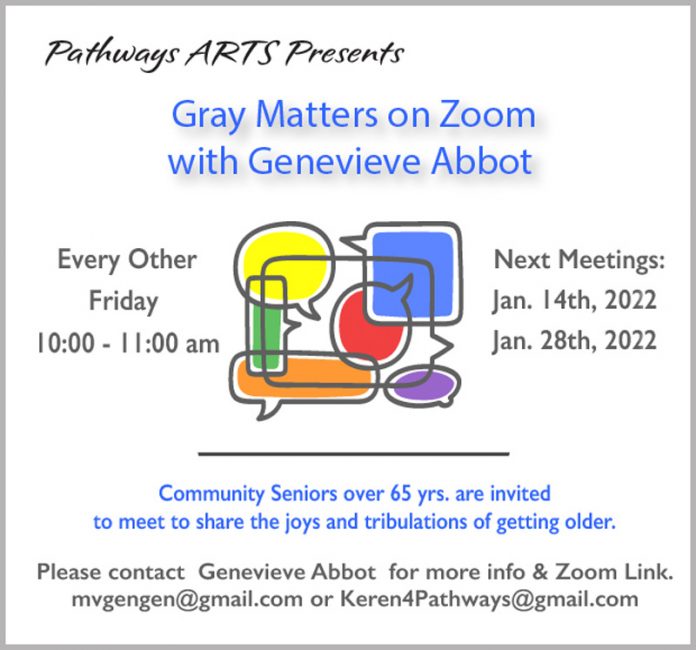 “Getting old ain’t for sissies,” Bette Davis famously said. Genevieve Abbot gathers seniors 65 and older to talk about this inevitability every other Friday on Zoom through Pathways Arts.

Abbot, an Island senior with a bachelor’s degree in psychology and master’s in theater, recalls how the group originated from a simple conversation. She and her cousin were comparing notes about being older and what that felt like, and how different it was from what they expected. “We wondered if there was a group on the Island where we could talk more about this, and couldn’t think of a place,” she says. “I decided that I should start a group and see how many people would join. Once you realize that you’re not alone in what you’re experiencing, there’s a real comfort in that.”

She calls the group Gray Matters, referring to that area of the brain that involves muscle control and sensory perception — including hearing, memory, emotions, speech, decisionmaking, and self-control. The group began last spring, and then stopped for the summer when everyone got so busy. “We got into such great conversations and topics that we decided to keep going,” Abbot reports, and she has started up again for the winter and spring season.

Topics of conversation have included how people adapted to COVID. Did they do anything that they enjoyed, or was it just a negative experience?

“It turned out that most of us just loved being home,” Abbot says, “and having the time to do the projects we wanted to; to have more time to garden and paint. We haven’t hit too many negative topics, like illness. The major complaint is that there isn’t enough time in the day to do all that we want to. Now that we have all this time, we want to do all the things we love doing, which is a great thing to realize.”

Abbot says that many people in Gray Matters are artists, writers, painters, and other creative folks. “I said to my husband how it’s amazing on the Vineyard who comes out of the woods,” she says. “There’s so many fascinating people who live here, so it’s a really good way to meet people that you never otherwise would.”

Recently, the group also started talking about ancestors: “One of us, Sam Low, is writing a book about his Hawaiian ancestors, and remembering the stories of his youth, so we plan to talk more about our parents and how they influenced us. I find that in my later years, I am thinking more about my parents, and wondered if that was true for other people. It turned out that it was, and we want to talk about that.”

Abbot wants to reassure everyone that the hourlong program is very relaxed. “You don’t have to talk at all,” she says, “and you can be on- or off-camera. You can come in anytime and leave anytime. I want it to be as friendly and as casual as possible.”