Perhaps the strongest trend evident this fall among the birds frequenting my yard in Oak Bluffs has been a resurgence in the number of house finches (Haemorhous mexicanus). House finches in our immediate neighborhood come and go; for several years, the species has been scarce. But in recent months, I’ve found a modest flock nearly every day, feeding on the fruits of red cedar trees in our small backyard.

I doubt that the Islandwide population of this noisy, distinctive songbird changes much over time. The species is always easy to find, especially in the suburbanized neighborhoods that seem to offer these birds highly favorable conditions. But numbers in any given area do seem to fluctuate, and I suspect the “here today, gone tomorrow” pattern I’ve observed applies to other parts of the Vineyard as well.

Part of that variability no doubt derives from the movements house finches make in search of resources. The species is downright haphazard in its choice of nesting sites: tree cavities, dense shrubs, ornamental plants in containers, or even holiday wreaths left up too long will all do the job. But while not strongly migratory, this bird is a virtuoso at finding rich supplies of seeds, which are its favorite food. And house finches are also notorious for valuing a reliable supply of fresh water.

Patterns of mortality may also shape where the species is common or scarce. House finches seem especially susceptible to a disease called mycoplasmal conjunctivitis, an infection that causes scaly swellings around the eyes and can blind a bird entirely, which naturally results in death. First noticed as a disease among finches in the 1990s, mycoplasmal conjunctivitis is spread by close contact among birds. House finches, gregarious birds that concentrate around rich food sources including feeding stations, are vulnerable to this disease because of their habits. (You can mitigate the problem by regularly cleaning and disinfecting your bird feeders.)

The history of the Eastern United States population of this bird may also contribute to the house finch’s vulnerability to conjunctivitis. Once restricted in the U.S. to the Western and Southwestern states, the house finch was introduced into the east in 1940, when a small number of illegally captured birds, intended to be sold as exotic cage birds, were released on Long Island, N.Y. The population spread at a prodigious clip, covering the Eastern portion of the U.S. in just a few decades and ultimately establishing contact with the original Western population.

The species is now found across the lower 48 states, but birds in the east are still presumed to show inbreeding effects caused by the population’s origin.
Aboriginally, the house finch was probably a bird of Western and Southwestern riparian corridors, mostly though by no means exclusively at lower elevations. But by the latter portion of the 1800s, naturalists noticed the habits of this bird changing in response to human alteration of the landscape. The species proved highly tolerant of human presence and able and willing to exploit crops and ornamental plantings as food sources. At times, the fondness of house finches for buds, seeds, and irrigated areas combines with their prolific and gregarious nature to make this bird a pest in agricultural areas. On the Vineyard, house finches can turn up virtually anywhere, but your best odds of finding this species are in settled areas with lots of bird feeders.

Wherever it occurs, the house finch is unusual among our songbirds in its almost entirely vegetable diet. Any other songbird, even among the seed-loving finches, supplements its diet freely with insects, especially when feeding young during the breeding season. But studies of the house finch diet reveal that arthropods make up only a tiny portion of the diet of this bird, a small enough percentage so that many observers believe these finches eat insects only by accident. This peculiarity probably does little to endear the house finch to farmers. Most other birds that can be crop pests redeem themselves at least somewhat by also eating harmful insects. Not so, the house finch!

Male house finches, often misidentified as purple finches, are grayish birds with extensive red on their crown, throat, and rump. The red varies in extent and even tint, supposedly in response to the characteristics of a particular bird’s diet. Females and immature birds are much more drab, grayish with rather diffuse dark streaking.

House finches are also noisy birds. Males sing persistently starting as early as mid- or late January; the song is a jumble of clear, whistled notes, almost always ending with a prolonged, shrill coda, and during the breeding season, this song is given during towering display flights. Call notes, including one sounding like that shrill song ending, are given frequently by these sociable birds, and flocks passing overhead are typically quite talkative.
I confess that I don’t pay much attention to house finches. They’re commonly encountered, and I suppose I have a prejudice against them as not so much native birds as wildly successful feral ones, akin to our non-migratory Canada geese. But the colorful males are a welcome sight in a bleak winter landscape. And the species is an interesting one, highly adaptable and with a unique history. I’m glad my local population has bounced back. 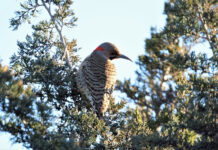 Wild Side: Making a strong showing 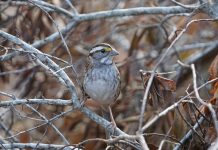 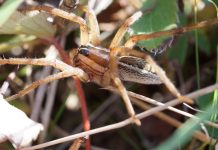