Jane C. Brown, 82, a unique, amazing person and a force of nature, passed away peacefully on Dec. 27, 2021, after defying the odds yet again by surviving cancer diagnoses far longer than she was told. 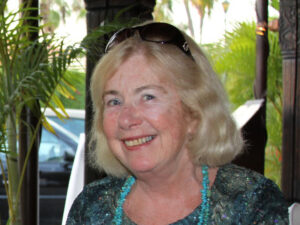 Jane was born and raised on Martha’s Vineyard, a fifth-generation Islander, born to Leo J. Convery and Irene Prada Convery. Throughout her life, Jane also spent much of her time in South Florida, eventually becoming a Florida resident in recent years.

Jane graduated from the MacDuffie School in 1957, and then spent time at both Simmons College (now University) and Katharine Gibbs in Boston. She lived in the Philadelphia area for several years, where she worked for Dick Clark and the “American Bandstand” show, developing a love for popular music that she carried throughout her life.

After moving back to the Island in the early 1960s, Jane worked for the family businesses, including the Harborside Inn. By the early 1970s, she opened her namesake real estate office, which carries on under her name today. In the late 1970s, Jane owned the Boston House restaurant, eventually turning it into a nightclub known as the Atlantic Connection, while also continuing to run both Jane Brown Associates and the Harborside Liquor Store. The Connection brought many musical acts to the Island.

By the 1980s, Jane began to focus her career pursuits on another love, antiques. Using Boothbay Harbor, Maine, as her home base for a time, she traveled across half the U.S. to shows, spending time in places like New York City, Round Top, Texas, and Nashville, Tenn. On many trips, Jane was accompanied only by her German Shepherd Andrew, terrifying her kids as she explored the country and made friends everywhere she went.

Throughout her life, Jane also cruised the world, experiencing many great adventures and making more friends. A taxi ride with a friend in Cartagena, Columbia, looking for a certain flea market she visited years earlier, comes to mind (terrifying her kids yet again). Jane was also an animal lover, rescuing cats, dogs, ponies, and ducks, and raising purebred German Shepherds. Jane was an avid bridge player (including online bridge) and a voracious reader.

James, and Ian and Nicole; and her great-grandchildren, Waylon and Hank.

A celebration of life will be held during the summer of 2022. For information, and/or to send condolences, funny stories, and more, reach out to Tricia (tricia@colefugee.com) and Jeff (cracka67@yahoo.com).

In lieu of flowers, the family asks that you consider a donation to A Paw in the Door in Bath, Maine (pawinthedoor.org), or to the charity of your choice.

“Some birds are not meant to be caged, that’s all. Their feathers are too bright, their songs too sweet and wild. So you let them go, or when you open the cage to feed them, they somehow fly out past you. And the part of you that knows it was wrong to imprison them in the first place rejoices, but still, the place where you live is that much more drab and empty for their departure.”  –Stephen King, Rita Hayworth, and “Shawshank Redemption”