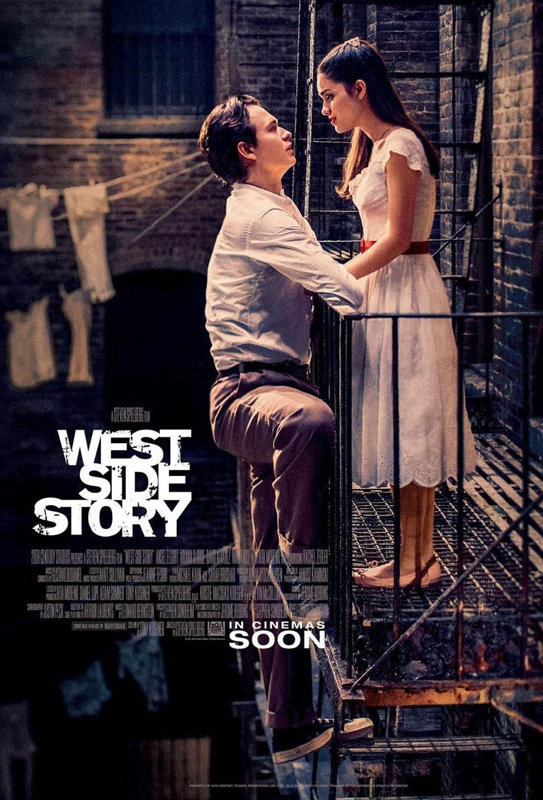 “West Side Story” plays at the Martha’s Vineyard Film Center this weekend and into next week. It is a terrific new version of the original. Some of Hollywood’s best of the best helped create this remake of the 1961, 10-time Oscarwinning musical. They include Steven Spielberg as director; Oscar-nominated, Pulitzer prizewinning playwright Tony Kushner as screenwriter; and Leonard Bernstein, responsible for music. No wonder the film is such a gangbuster. It was inspired by Shakespeare’s classic tragedy “Romeo and Juliet.”

The acting is first-rate, too. Ansel Elgort plays Tony, Rachel Zegler plays Maria, and Ariana DeBose is Anita, along with many other top performers. A special treat is Rita Moreno, who won an Oscar for her role as Anita in the original version, playing drugstore owner Valentina. She is the musical’s one senior citizen and parental figure.

After an overview of the rubble in the Upper West Side caused by Robert Moses, the film bursts into dancing by the Jets, the all-white gang planning to fight the Puerto Rican Sharks. Their 1957 world is based on the New York section where construction of Lincoln Center was going on. The characters’ dancing captures the energy and aggression these young men exhibit.

One of the impressive and appropriate decisions made by Spielberg was to have the Puerto Ricans speak in uncaptioned Spanish. It may be a challenge for viewers, but it shows a modern-day respect for Latino culture. Regardless, hostility toward immigrants and racism make this musical relevant to today’s issues.

In the next scenes, the characters prepare for a school dance. Viewers meet Maria, a lovely Latina with a gorgeous voice; her boxer brother Bernardo; and his girlfriend Anita. Maria is dressed in a stunning white dress with an added red belt, and she heads to the dance with her date Chino (Josh Andrés Rivera). There she meets handsome, tall Tony, who is white, and it’s love at first sight, despite the two coming from opposite cultures. The two rival gang members prepare for a turf battle that Tony tries to prevent from happening. So the story’s undercurrents grow dark and threatening.

The music, which has weathered beautifully, comes into play, adding to the vividly romantic story. Maria’s and Tony’s first date takes them to the Cloisters, a handsome counterpoint to scenes in the gritty barrio both gangs’ members have grown up in. Maria’s Puerto Rican brother threatens both Maria and Tony because Tony is white and Polish American.

In a subplot, the Jets break into comedy at the police station in one of the musical’s most memorable songs, “Gee, Officer Krupke.” This song generated controversy over the phrase, “Krup you,” and whether it actually was sung “f___ you.”

In preparation for the rumble Riff (Mike Feist) buys a gun, which later comes into tragic play. A joyous Maria gets ready for her next meeting with Tony, who is learning a few Spanish words. Once the rumble takes place, terrible things happen and lead to the tragic ending.

Information and tickets for “West Side Story” are available at mvfilmsociety.com. To find the schedule of films at Edgartown Cinemas, visit entertainmentcinemas.com/locations/edgartown.