Barbara Prada was known to many as Edgartown’s longtime animal control officer, but she had a wide array of talents and interests that she shared with her friends and family.

“We were kind of a wild bunch,” Prada’s sister Mary Dubrowski told The Times by phone. “Everybody liked Barbara.”

Prada was the Edgartown animal control officer (ACO) for 37 years, beginning her tenure in 1980, and continuing to 2017. Her connection with animals also began at a young age.

“As she grew up, Barbara’s outstanding connection with animals became apparent to all. Of course, the Prada house always had cats and dogs. All the Prada sisters were involved with keeping and riding horses at Sweetened Water Farm through 4-H, and later at Bittersweet Farm. Barbara started with the famed Tumbleweed of Pond View Farm,” her obituary reads.

Prada received the ACO of the Year award in 1994 from the Massachusetts Society for the Prevention of Cruelty to Animals (MSPCA).

Rita Brown, an Edgartown resident, knew Barbara Prada for 20 years. The two were part of the team that worked together and with the state on the Martha’s Vineyard Disaster Animal Response Team. The team is affiliated with the state’s animal response team.

“She was very down-to-earth, very grounded, a very authentic woman. The quintessential Island person,” Brown said. “I think we were very fortunate to have her here in Edgartown.”

Prada was also known as a mentor to Edgartown ACO Catherine (“Betsy”) Young Buck. Young Buck told The Times Prada trained her to become an ACO, and was instrumental in establishing Edgartown’s animal control office as it exists today, as well as organizing the Island rabies clinics.

“She cared about people, she cared about the community,” Young Buck said. “She was wonderful with animals, she was gentle and patient. She found humor in a lot of animal behavior too.”

Young Buck said Prada was pragmatic in her approach to her position, and was always up to date on animal laws and regulations.

“As far as law enforcement, she made sure she kept in mind the best interests of pets and owners,” she said. “She trained me to treat everyone the same, no matter who they are.”

Dubrowski and her sister Ursula recounted anecdotes from Prada’s childhood and beyond, like how Prada loved to collect painted bird models, fossils, and minerals, her love of knitting Icelandic sweaters for family members, and her ability to refinish thrown-out furniture or build her own.

But most memorable of all was Prada’s popularity among locals and seasonal visitors alike for her even-keeled demeanor.

“She had a job trying to maintain the community, and she was really good at it. The town was lucky to have her,” Dubrowski said. “Every big family has a person that everyone can talk to, and that was Barbara in our family. Everybody liked Barbara.” 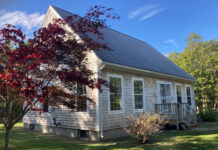