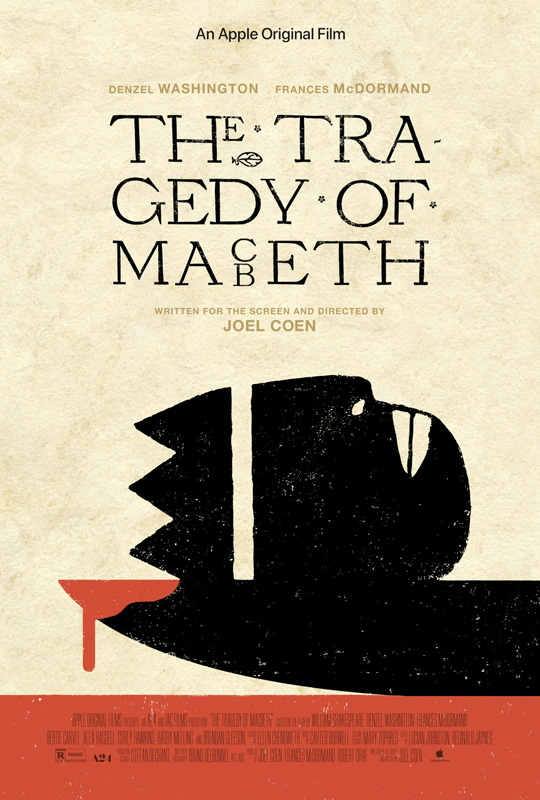 “The Tragedy of Macbeth” continues its run at the Martha’s Vineyard Film Center through Thursday, Jan. 27. One of Shakespeare’s greatest and most popular plays, it stars Golden Globe winner Denzel Washington and Oscar winner Frances McDormand. It is directed by four-time Oscar winner and McDormand’s husband, Joel Coen. Coen directs for the first time without his brother Ethan, with whom he usually collaborates. He draws inspiration from Akira Kurosawa’s “Throne of Blood.”

Coen pares down the play to its bare bones, and dramatizes the stark black-and-white setting with imposing sets that emphasize the central characters. For those familiar with the play, the central scenes are all there.

This version begins with Macbeth and Banquo returning victorious from a battle against the thane of Cawdor. In a stunning performance by Kathryn Hunter as not one but the three witches, she foreshadows Macbeth’s future as king and Banquo as the father of kings. Hunter twists her limbs into surreal contortions as the three witches. King Duncan (Brendan Gleeson) calls for the thane’s execution and confers his title on Macbeth.

The fiercely ambitious Lady Macbeth persuades a reluctant Macbeth to murder Duncan. She drugs the king’s servants, and Macbeth performs the deed to become king. Disturbed by the witches’ prediction about his friend Banquo, Macbeth also arranges for his murder. Luckily, Banquo’s son Fleance escapes.

At a banquet for the Scottish thanes, an anxious Macbeth imagines he sees Banquo’s ghost. Lady Macbeth intervenes, asking the guests to leave and sedating Macbeth. The three (in one) witches reappear, conjuring a vision of Fleance and warning Macbeth about the danger of McDuff. They also prophesy that Macbeth will be king unless Birnam Wood comes to Dunsinane Hill, and that no man born of a woman can harm him. Overcome by blood lust, Macbeth orders his vassals to murder Macduff’s family. Macduff, however, has escaped to England, as has Fleance.

Sleepwalking, Lady Macbeth grows increasingly anxious about her role in the murders and, overcome by madness, kills herself. Macduff, bent on revenge, gathers English military forces and returns to Scotland. Fulfilling part of the witches’ prophecy, his army disguises themselves with tree limbs at Birnam Wood, and march to Dunsinane. And fulfilling the second part of the prophecy, Macduff, who was ripped untimely from his mother’s womb, attacks Macbeth and finally beheads him. The fight takes place in a dramatically narrow corridor, and Duncan’s son, Malcolm, becomes the new king.

Despite their compression, the play’s key elements effectively tell the story. The setting, with its haunting fog and dramatic interiors, accounts for much of this version of the play’s brilliance. The characters are more of a challenge. Both Washington and McDormand never entirely lose themselves in their roles. Coen’s approach has also been to keep them somewhat muted and conversational. “The Tragedy of Macbeth” remains a breathtaking film noir. The viewer never forgets the wages of sin.

Information and tickets for “The Tragedy of Macbeth” are available at mvfilmsociety.com.