The Martha’s Vineyard Center for Living (MVC4L) met adversity head-on when the pandemic descended. With their clients no longer able to attend live programs, necessity became the mother of invention, spawning their new venture: “TV for Living.”

“I guess the idea came to us because everybody was trying to figure out how to service our elder community through COVID in 2020,” said Mary Holmes, supervisor of the Supportive Day Program. “We were Zooming with our elders, but there were a few families that were not able to get online, either because the technology piece wasn’t there, or there wasn’t anyone to help them. We thought, Well, we have a community television station, MVTV … what if we put some programming on the television station?”

The Martha’s Vineyard Community Foundation helped with seed money to get them started, and MVTV loaned the equipment and gave them a weekly time slot at 11 am on Wednesdays.

Each week is a different episode. Sometimes they are about the work the center does and the services they provide, but many are about their programs. Lisa Amos offers an exercise class called “Functional Fitness.” “We were able to take the Zoom recording and cut it into a television program,” Holmes explains.

“TV for Living” is in its second season, and there’s a plethora of choices. Scrolling through the center’s website or the streaming page on the MVTV website, you see shows on topics such as caregiver’s 10 commandments, Island library resources, osprey from Felix Neck, ghost stories by historian Tom Dresser, Misty Meadows, music with Melissa, artist Steve Maxner on his work for the exhibition “Such … Is War,” art appreciation about Helen Frankenthaler, and more. Season one was a whopping 50 episodes. So far, season two has 10 episodes, now that the center is open for live programming.

The first year, Holmes’ goal was to make sure what they were doing was accessible to the community, whether it was an actual recreational activity or about their services. Now she is trying to interview clients about the things they know and their wisdom in a documentary style.

“I feel like there is a possibility here to present to the community another way to think. For instance, about a person living with dementia and other age-related disabilities, and to understand that our clients are fully able to participate in our world and be active members of our community.”

Holmes has experience in filmmaking, and edits, shoots, and sends each program off to MVTV. “This is a skill I haven’t used in a long time. I have an undergraduate degree in film, and worked in the industry for many years as a documentary production manager and coordinator. I made my own independent films when I was young. My area of expertise now is eldercare, but it’s something I’ve had in my back pocket.”

Holmes says she’s old enough to have learned how to edit by touching the film. “We used a splicer to splice films,” she says. “We would have to get our negatives edited through a negative cutter.” But Holmes isn’t daunted by the new technology. With her understanding of how it works, she’s able to easily navigate Final Cut Pro or Adobe.

Likewise, Holmes said she can’t stress enough how valuable MVTV is as a community resource: “It’s right there. They will train you how to make programs.”

Tune in at 11 am on Wednesdays on MVTV, and watch recordings at their on-demand page at bit.ly/MVTV_on_demand or visit MVC4L’s website, bit.ly/MVC4L. 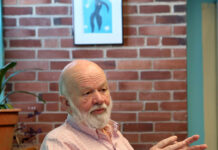