We have a 6-year- old, un-neutered miniature ginger dachshund named Max. He has an absolute compulsion to chew holes in blankets and quilts, with, I’m afraid, occasional swallowing of stuffing. If I see him chewing, I simply say his name, he stops, but goes right back to it asap.

He has spent the entirety of his life with an old, particularly sluggish, female Sheltie. Since her death, he has become more attached to me, howling whenever I leave the house without him. He has also become more protective of the house and property, and has taken to unpredictably nipping people who come to the house. I am wondering if a second dachshund in the house would help any of this despite his alpha temperament?

There’s a special place in my heart for “Doxys,” as my first dog as a child was a Doxy named Timmy. The three problems you mention have the potential to become somewhat serious. Pica (eating non-edibles), separation anxiety, and aggression (nipping people) are worthwhile addressing.

For the pica, I’d suggest my “Dog God” concept. MGK, as far as Max is concerned, the “Dog God” (DG), has nothing to do with you. DG sees all, and corrects Max when DG sees him chewing a blanket. Try a small, handheld ultrasound device, or an easily concealed real noisemaker, or a vibration collar, etc. When you see him starting to chew the cloth, startle him with one of the devices. Don’t even look at him, it should have nothing to do with you! The DG doesn’t like it when Max starts chowing down on cloth, and will therefore startle Max, having nothing to do with you, as you are very subtle about deploying the device. If need be, set up a mirror and leave the room, and when you see him start on the blanket, DG deploys. Max needs to relate the negativity of chewing the cloth to CHEWING THE CLOTH, not you, because if you’re not around it’s fair game. Plus, the last thing you want to do is use his name as a correction, you want him to come when you use his name. Also, present him with “special toys” before he starts the pica. A small hollow marrow bone with a piece of cheese wedged in the middle will probably be more attractive to him than cloth.

As for the separation anxiety, absolutely DE-EMOTIONALIZE leaving and returning. No long goodbyes, just “See ya later Maxy” and toss down several doggy treats for him to garner, and perhaps one or two hollow marrow bones with a little meat wedged in the middle where he can’t really get it, but will keep trying. When you return, no reunion hugging and kissing, just “Hey Max” and go put on a cup of tea. And remove the marrow bones with meat — he gets them only when you leave.

As for “nipping” people who come to the house, I establish a “door routine,” a routine whereby Max earns a treat for his cooperation with newly arrived guests. This might require some help, so I suggest you email Jeremy at jeromejones@comcast.net, and get my book, “Dog Training Diaries.” Jeremy will rewire your relationship with Max for the better, and “Diaries” will also be very helpful. As for getting another dog, assuming they get along, like children, the new dog is more likely to pick up the bad habits from Max rather than the other way around.

Best wishes, and give Max a kiss for me. 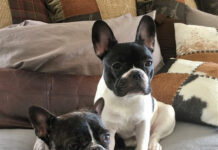 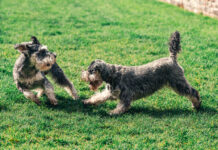