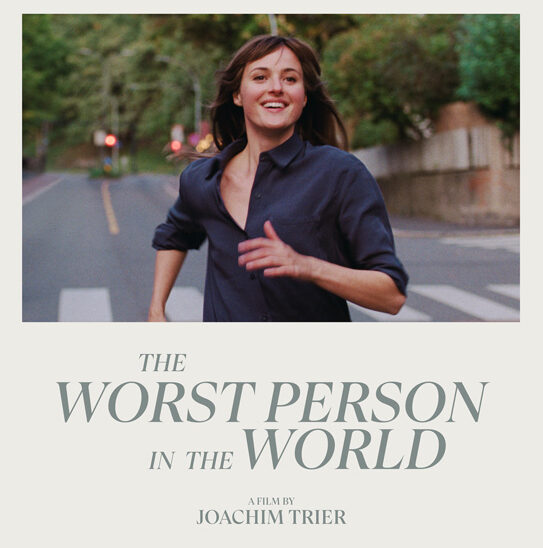 The Norwegian film, “The Worst Person in the World,” opens on Friday, Feb. 18, at the M.V. Film Center. The third in the Oslo trilogy by co-screenwriter Oscar nominee and director Joachim Trier, it has also been nominated as Norway’s entry as the International Film Oscar.

Starring Cannes best actress winner for the film, Renate Reinsve as Jule (pronounced Julie), this is the sexually explicit tale about a young woman who can’t seem to make up her mind about her career and, for that matter, her entire life.

“The Worst Person in the World” relies on literary devices to structure its story. The narrative is made up of 12 chapters as well as a prologue and epilogue. It opens in the prologue with a single shot of Jule looking at the skyline of Oslo. A medical student, she is smoking and then checks her cellphone. Next the viewer sees her in a classroom, followed by her attendance at a surgical demonstration. But Jule decides surgery is too concrete for her and she prefers to study the soul. So she chooses psychology instead.

Once again changing her mind, she determines she’s a visual person and that she wants to be a photographer. Having left medical school, she takes a job in a bookstore to support herself. It’s another, if brief, literary allusion. This is a woman who knows what she doesn’t want but not what she does.

Moving to Chapter One: “The Others,” she is seen at a party where she meets Aksel (Anders Danielsen Lie), a successful graphic artist, and she fibs about having read his story about the cartoon character Bobcat. After they have sex, she decides she’s in love with him. Even though he is in his 40s and almost 20 years older, she moves in with him. They discuss having children but she remains ambivalent. They have explicit conversations about Jule’s preferences around sexual arousal.

In Chapter Five: “Bad Timing.,” Jule decides she wants to leave Aksel, and the viewer sees her running while everyone else is frozen. It is an interesting scene that works effectively to convey her liberation from Aksel and her commitment to Eivind.

“Finnmark Highlands” is the title for the sixth chapter, where the scene shifts to Eivind hiking with his wife Sunniva (Maria Grazia di Meo). Sunniva decides to become an environmental activist and that takes up her time. By Chapter Eight: “Jule’s Narcissistic Circus,” Jule has an out-of-body experience from imbibing psychedelic mushrooms. Eivind is the one who calls himself “the worst person in the world,” but the viewer is likely to wonder if, with more than a touch of irony, Trier intended for Jule to be seen as the more likely one to fit that adage.

“I feel I can relax with you completely,” Jule tells Elvind. In Chapter Nine: “Bobcat Wrecks Xmas,” while exercising in a workout center, Jule watches Aksel in an interview and is stunned by his anti-feminist remarks. Then she finds out from a friend that Aksel has pancreatic cancer and is even more stunned.

At times these episodes may seem unrelated, but they fit together successfully to enrich Jule’s life and her search for meaning, at times through the events in other people’s lives. The emphasis on her sexuality makes a statement about a woman’s identity. The two Oscar nominations “The Worst Person in the World” has received — one for Best Screenplay and the other for Norway’s Best International Film — have been well earned.

Information and tickets for “The Worst Person in the World,” which is not appropriate for children, are available at mvfilmsociety.com. Information about films playing at Edgartown Cinemas is available at entertainmentcinemas.com/locations/edgartown.