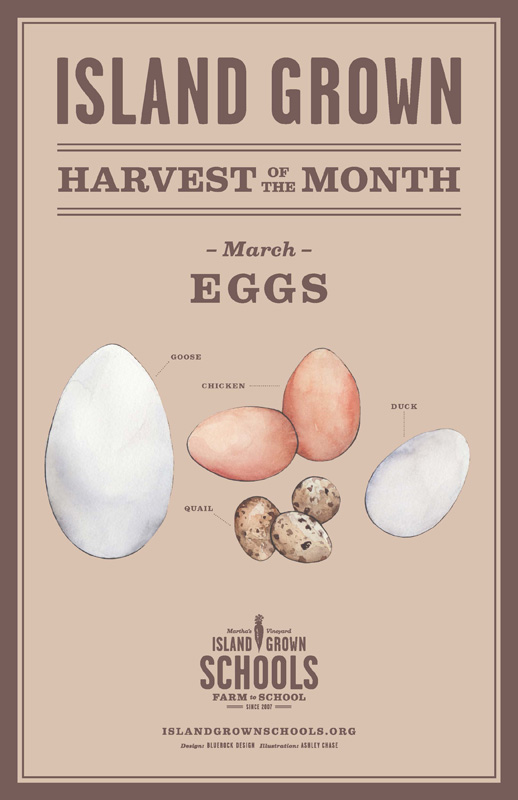 It’s March, which means spring is on the way! The weather might say otherwise, but the proof is in the crocuses beginning to sprout, and sunlight that lasts past 6 pm. This time of year, chickens respond to the change in light and temperature by laying more eggs. Hens require exposure to sunlight to produce eggs, so when daylight hours go below 14 in the winter, many hens stop laying until March, when they can lay up to one egg per day!

Local eggs can be found at Cronig’s, Morning Glory Farm, Vineyard Grocer, and Ghost Island Farm. Seven to eight dollars might seem like a lot to pay for a dozen eggs, but 60 cents an egg makes them one of the cheapest local sources of protein available. Free-range chickens that are allowed to forage for a variety of plants and bugs have eggs with deep yellow yolks that are rich in protein and omega-3 fatty acids. They also contain less fat and cholesterol than eggs from hens that are kept in cages.

Take a break from fried and scrambled eggs by trying a quiche or frittata for breakfast instead. Pack a hard-boiled egg in your lunch box for a snack, or mix whisked eggs into a stir-fry for a little additional protein. You can also try this month’s featured recipe, Spanish Tortilla.

Recipe by Maura Martin and Austin Racine of Mo’s Lunch

Preheat oven to 350°. In an 8- to 10-inch skillet over medium high heat, add olive oil and heat on medium. Add potatoes and onions and cook, stirring until potatoes are just done but not falling apart. While potatoes and onions cook, crack the eggs into a bowl and whip with salt and pepper.

Next, strain the potato and onions into a colander on top of a bowl, to catch all the oil. Reserve oil. Wipe the skillet clean of any potato bits that may have stuck, and return the skillet to the stove on medium heat, with ¼ cup of the reserved, strained oil. Move the oil around the pan to coat the whole surface. Whisk the rest of the reserved oil slowly into the eggs.

Next, add the potato/onion mixture to the egg mixture, and then pour it all together into the prepared skillet.

Gently go around the pan with a spatula, and pull the mixture from the outer edges of the pan to the center, scraping the bottom, as it cooks. After doing this once all the way around the pan, be sure the sliced potatoes are evenly distributed throughout the pan, remove it from the heat, and place the skillet in the oven.

Either cut into wedges and serve from the pan, or place a plate large enough to cover the skillet on top and gently but quickly flip the pan over, releasing the tortilla onto the plate, being very careful of dropping hot oil. Cut into wedges, and serve with a simple salad.