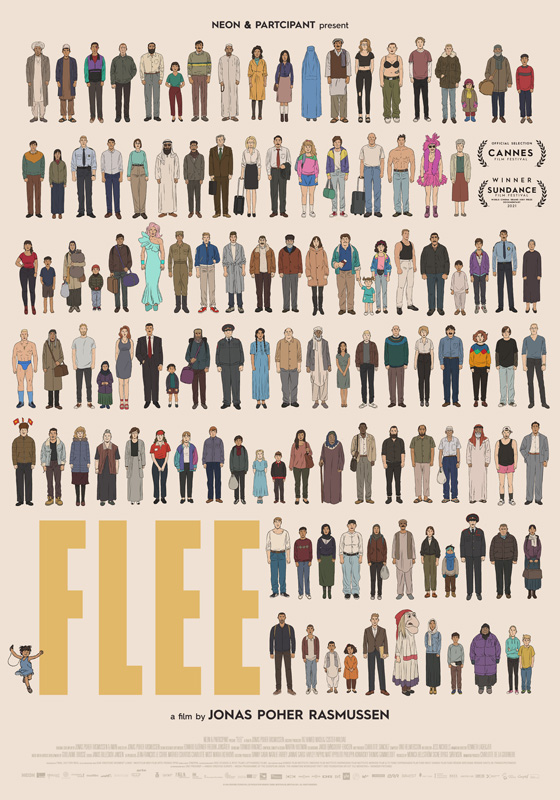 “Flee,” a docudrama about an Afghan refugee, plays at the M.V. Film Center on Thursday, March 17. It is particularly relevant in light of the current Russian invasion of Ukraine. This film combines accomplished animation by 10 animators and live action to highly successful effect. Directed by two-time Danish Oscar nominee Jonas Poher Rasmussen, it tells the true story of Amin Nawabi, who uses an alias for safety and has escaped from Afghanistan. A highly acclaimed film about the refugee experience, it earned the Danish Oscar entry (the Academy Award ceremony is scheduled for March 27) for animation, documentary, and best international feature. It’s the first time a film has earned all three nominations, also winning the Sundance Grand Jury Prize, and many other critics’ awards for best LGBT representation, among other prizes.

Nawabi had planned to marry his husband-to-be in a forbidden homosexual relationship. In this case, animation was the safest way to tell his story, although live-action inserts reinforce the fact that this is a true story. Early in the film come overheads, live scenes of streets, cars, and people, illustrating that this is reality.

The film begins with an animated portrait of Nawabi as he, now an academic in his 30s and a Princeton postdoctoral student, tells his story. In 1989 as a child, he is shown playing outdoors in his sister’s dresses. To make matters worse, there is no word for homosexual in Afghan language, and Nawabi has realized he was gay since he was 5 years old, admiring his poster of Jean-Claude Van Damme.

After his father is abducted, members of the family escape to Moscow, the one place that will accept them. They wait there a year for older brother Said (Belal Faiz), who has promised to get them to Sweden, and gives his mother cash for her escape.

“Flee” becomes a thriller of sorts as first they are taken by human traffickers and later shut in a container, traveling across the Baltic Sea, where the boat is hit by a storm. Nawabi fears they will die. Then they are captured by masked police and locked in a building, another harrowing experience.

Once he arrives safely and alone in Copenhagen, he waits years to see his siblings, who are spread across Europe. He still doesn’t know what has happened to his father. Welcomed by his fiancé Kaspar, the two marry and look at a house, a sign of a new form of safety. According to Nawabi, it’s important to be tough, and his experiences have been hard to live through. You grow up too fast, he adds, and you remain constantly on guard.

The combination of animation and live action makes “Flee” a remarkably powerful film, one that may well win several Oscars.

For information and tickets, visit mvfilmsociety.com. For information on films playing at Edgartown Cinemas, visit entertainmentcinemas.com/locations/edgartown.