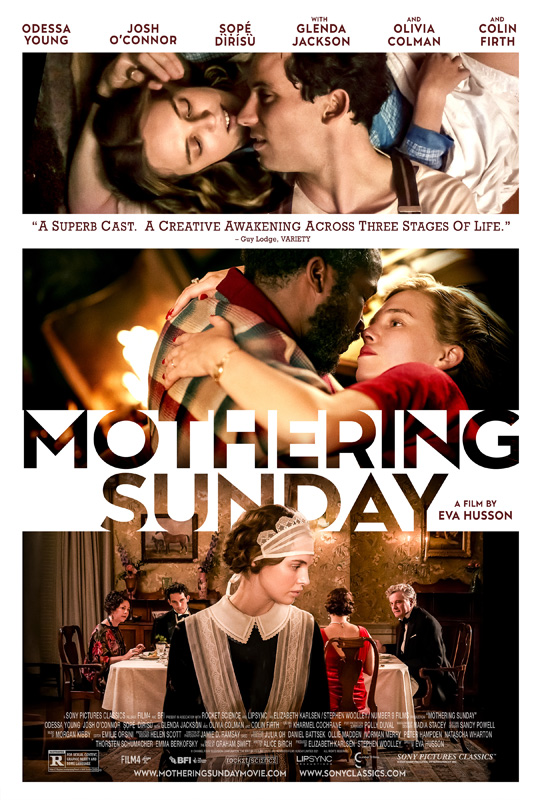 The British film “Mothering Sunday” opens at the M.V. Film Center on Friday, April 8. Based on the 2016 novel by Graham Swift and directed by Eva Husson, it depicts a transformative day in the life of the young maid and aspiring writer Jane Fairchild, played by Odessa Young. It is one of a group of British narratives like Virginia Woolf’s “Mrs. Dalloway,” also set on one post–World War I day. The title “Mothering Sunday” comes from the British holiday similar to the American Mother’s Day.

Jane has been in service to the aristocratic family of Godfrey Niven (Colin Firth) and his wife Clarrie (Olivia Colman) since she was an orphaned 14-year-old. The year is 1924, the postwar era, and the Nivens lost their two sons in World War I. In addition, Jane has been carrying on an affair with the Nivens’ neighbor’s son Paul Sheringham, played by Josh O’Connor. The couple’s explicit frontal nudity suggests the comfort of a long-term relationship rather than an overtly carnal one. Their class difference makes it clear that this affair is limited in nature. Indeed, Paul is engaged to Emma Hobday (Emma D’Arcy), a more appropriately aristocratic young woman, and at one point, Jane even discovers a copy of her lover’s wedding invitation.

Although the film focuses on one Sunday at the Nivens’ and the Sheringhams’ country estates, time shifts enhance what is a nonlinear narrative structure. The nature of Godfrey and Clarrie Niven’s grief over the loss of their sons unfolds gradually, and each of them experiences it differently. The viewer will experience a frisson of tension when Jane, still nude after lovemaking with Paul, wanders through the Sheringhams’ empty house, exploring the markers of an aristocratic material world. Her filching a copy of “Kidnapped” from their library foreshadows her future career.

The viewer learns that Jane has taken a job at a bookstore rather than remaining with the Nivens, a job that will help her become a writer. The Oxford philosopher Donald (Sope Dirisu), whom she marries, asks what has led her to become a writer. She describes three pivotal events: her orphaned birth; the gift of a typewriter from her bookstore boss; and the last she keeps as a secret. The later success of her writing career is illustrated by a brief scene in which an older Jane, played by Glenda Jackson, dismisses inquisitive journalists.

“Mothering Sunday” ends with a shattering event that may ultimately play into Jane’s coming of age as a writer. Like a prism, it deconstructs Jane’s world from a single day that includes the people who play definitive roles in her life.

Information and tickets for “Mothering Sunday” are available at mvfilmsociety.com. Information about films playing at Edgartown Cinemas is available at entertainmentcinemas.com/locations/edgartown.