Darlene P. (Cook) Pachico, 87, formerly of Vineyard Haven, passed away on Monday, March 14, 2022, at Falmouth Hospital with her daughters by her side. 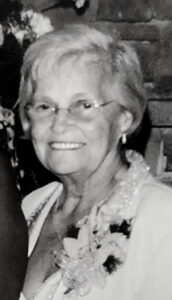 Darlene was born on Oct. 18, 1934, in Haverhill, daughter of Willard W. and Esther M. (Belmer) Cook. She grew up in Haverhill and met her future husband, Francis E. (“Sancy”) Pachico, while visiting Martha’s Vineyard with girlfriends over a sunny Fourth of July weekend in 1955. They married March 24, 1956, in a New Hampshire blizzard, and returned to the Vineyard to start their amazing life together.

With the birth of four children in the first five years of marriage, Darlene excelled at motherhood, making it look easy, while Sancy started his very successful career in the Island’s school system. They moved the family into a wonderful family neighborhood on Skiff Avenue in Vineyard Haven in 1962. Summers on the Island were magical, the family enjoying every aspect of island life! A long day of swimming at State Beach made for an early bedtime for her active children. Darlene and Sancy then had their special time.

After her four children entered high school, Darlene went to work at Martha’s Vineyard Hospital for Dr. Charles Clayton as his administrative assistant. Even with a full-time job, she found time to attend many of her children’s sporting events, and volunteer at the American Legion and the Portuguese-American Club.

Darlene and Sancy had many close Island friends and family, and would enjoy cookouts, fishing, and four-wheeling on the beach. When several grandchildren arrived, they were included in these adventures. After retirement, they would winter in Port Charlotte, Fla., and seek out small islands and beaches to explore. The sudden loss of her husband was devastating, but with the close-knit community of the Island, family, and her inner strength, Darlene pushed on.

Some of Darlene’s favorite hobbies included feeding the Island — whether it be her legendary calzones at the annual Portuguese-American Feast, a homemade meal for a friend recovering from surgery, baking cookies for a neighbor “who was sweet enough” to do a kind gesture for her, or making Island chocolates for the Legion’s Christmas Bazaar. Her dedication to her family and the community was remarkable.

She was married to Francis E. Pachico for 42 years, prior to his passing in 1998. Their son, Gary F. Pachico, sadly passed away this past January. She lost her newborn grandson, Justin Pachico Crossland, in 1993. Darlene’s sister, Lucinda Mercer formerly of Wichita, Kansas, predeceased her in 2016. She is survived by her sister, Linda Wendell of Haverhill; her brother, David Cook, and his wife Sharon of Kissimmee, Fla.; and her three daughters, Lauren Walsh and her husband Bill of Mashpee, Patricia Pachico and her partner Eric Woods, Lynne Silvia and her husband Jack, all of Vineyard Haven. She also remained in close contact with the family’s high school exchange student from 1972, Daniel Poletto, and his wife Maria from Argentina.

In lieu of flowers, donations can be made to the American Legion Auxiliary No. 257 or the Portuguese-American Club.