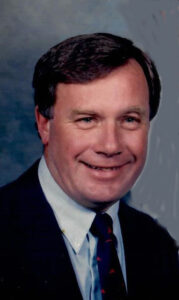 Born in Great Neck, Long Island, in 1936, Peter grew up in Bedford, N.Y., and was a 1954 graduate of the Exeter Academy and of Duke University in 1958. After college he was commissioned into the U.S. Air Force as a second lieutenant, and was stationed in Tokyo, Japan.

A year-round resident of the Island for over 30 years, Peter spent his childhood summers at his family home on Seven Gates Farm. Active in his church and a community volunteer, Peter served on the Oak Bluffs zoning board for several terms. He was a lifelong sports enthusiast who loved to play soccer, paddle tennis, and golf. Peter was also an avid sports fan, including his beloved New York Yankees, the New England Patriots, Duke basketball, and in his later years, the Martha’s Vineyard Sharks.

He loved the beach, his Great Danes, gardening with his wife, barbecuing for family and friends, and was an avid reader of his Sunday paper and a good book. In his earlier years, Peter had a rewarding career in Manhattan in advertising, and later built a successful manufacturer’s representative business with his wife Peggy.

Loving son of Mildred Wight Yoars and Harry Albert Yoars, Peter is survived by Marjorie (“Peggy”) Moore Yoars, his wife of 41 years. Peter was a devoted father to his five children, Elizabeth Grant of South Salem, N.Y., and Oak Bluffs, Tracy Drew of Plymouth, Hunton Tiffany of Avon, Conn., Rawls Tiffany of Oak Bluffs, and Peter Yoars Jr. of Madison, Conn. He was also a beloved Pop-Pop to his nine grandchildren, and is survived by many loving nieces, nephews, relatives, and friends.

Arrangements are in the care of Chapman Funerals & Cremations in Oak Bluffs, and messages for the family can be left on its website via the Obituaries page.

A celebration of life will be held at the First Congregational Church of West Tisbury at 1051 State Road on Saturday, May 7, at 2 pm. The family welcomes you to join them at the service and the reception to follow.