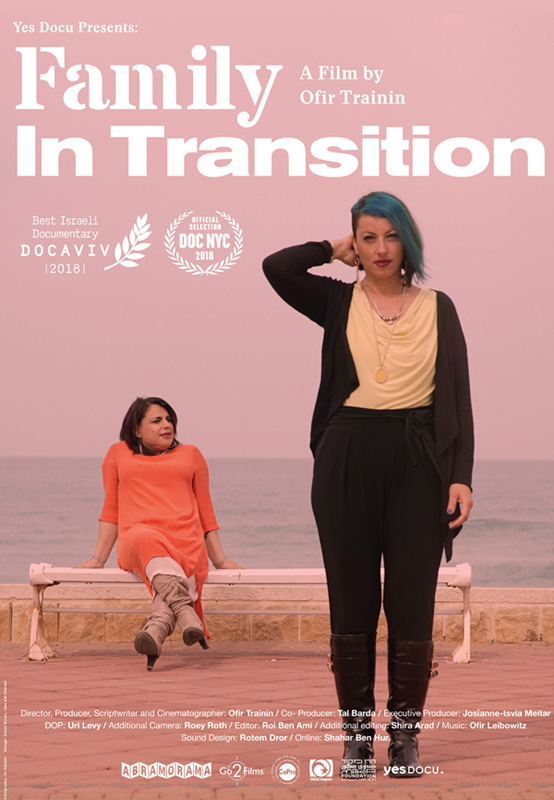 The documentary “Family in Transition” is probably the most interesting among the LBGTQ films in the upcoming Spectrum Film Festival. It plays on Saturday, May 7. Set in the northernmost Israeli coastal city of Nahariya and directed by Ofir Trainin, it describes Amit Tsuk’s transition from male to female, a change he/she had desired since childhood.

The film begins with videos of the wedding between Amit and Galit, his wife. The couple had four children before Amit decides after 20 years that he is really a woman, and begins to take on feminine qualities, initiating a transition. He starts to wear makeup, dresses, and nail polish. At a birthday party, family members applaud Amit, apparently accepting his change.

As he becomes she, a loving Galit supports the change. Amit explains to friends and colleagues the transition in gender, and finds acceptance there too. Members of a loving family, the children accept the change in their parent. One of the daughters even brings Amit a pair of earrings to wear.

In anticipation of the physical change that will complete the transition, Amit begins taking hormones, although Galit finds herself frustrated by Amit’s new emotionalism. As a reminder of the discrimination that Amit continues to experience, several passing young men shout “Faggot! Dyke!” when she and Galit are walking down the street. While they are for the most part accepting, one of Amit’s daughters discusses with friends her bullying treatment at school. At their third child Agam’s bat mitzvah, some members of the extended family are missing.

The surgery will take place in Thailand, and as Amit says, “I will be more at peace with myself.” Galit travels with Amit to Bangkok for the surgery. Despite the challenges, Galit continues to be supportive of her spouse’s transition. It is several weeks before Amit arrives home in a wheelchair, discussing what has happened, and the Tsuk children are happy to see her. Amit — now Imit — and Galit remarry, wearing matching white wedding gowns.

But Galit increasingly finds the transition has taken its toll. She realizes she has changed, at first wanting to be alone, and then deciding to divorce a less-than-happy Imit. The challenges in a Jewish court, which requires the husband to decide on the divorce, conflict with Imit’s insistence that she is a woman. Eventually, though, Imit decides to pursue the divorce as a putative man. In a year, both Imit and Galit have found themselves in new relationships.

As powerful and interesting as “Family in Transition” is, the structure of the film creates the family without any of the conflicts or complexities that must have been involved. Nevertheless, this film illustrates with fascinating insight what one family experiences when a family member changes sexes.

Information and tickets for “Family in Transition” and the other Spectrum films are available at mvfilmsociety.com. Information about films playing at Entertainment Cinemas in Edgartown can be found at entertainmentcinemas.com/locations/edgartown.