Licenses were approved by the Edgartown select board for three Edgartown taxi companies —  MV Taxi, Stagecoach and Adam Cab — Monday. Edgartown Police Chief Bruce McNamee said he “looked over the last year’s worth of calls of service involving those three cab companies and there’s really nothing that jumped out at me that would prevent any of them from being renewed.”

Town Administrator James Hagerty briefly mentioned that the ongoing discussions regarding the funding formula working group for the MVRHS maintenance project are “progressing,” noting the upcoming working group meeting on Wednesday will hopefully conclude in “somewhat of a successful product.”

“But then again, those are ongoing [discussions],” he said. As The Times reported, the working group is leaning toward a formula based on 25 percent equalized valuation (EQV) and 75 percent enrollment.

In other business, the following town reappointments were announced by select board Chair Margaret Serpa and approved by the select board:

Board of Registrars, a three-year term: Kristy Rose, 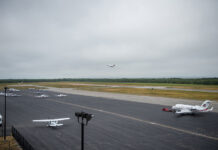