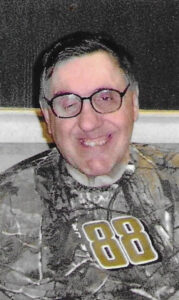 He was born on the Island on June 13, 1951, to George King Sr. and Dorothea King. He spent most of his life living and working on the Island. Following in the footsteps of his grandfather Grafton E. King and father George Sr., he became a member of the West Tisbury Fire Department, Station 2. In the 1970s he married Gwen Smith, and took on the responsibility of helping to raise four stepchildren.

George loved to fish and hunt, and enjoyed life to the maximum. In December 1986, he had a horrific accident that changed his life forever. Through strength and determination, he survived. He could no longer go fishing or hunting, or do what he had always done. But he kept his sense of humor and his enthusiasm for life.

He enjoyed watching his wrestling and Western movies on television, and listening to all types of music. He especially enjoyed his “Friday night cruising” with Chief George Manter, when the chief was able to take him. It was a longstanding tradition, starting with his father, then passing to George Jr.

In May 2006, George and his mother moved to Santa Ana. After her passing in 2010, he had the option of moving back to the Island or staying in California with his sister. He chose California; he loved the warm weather, his dog Sparky, and the fact that it didn’t snow where he was!

There will be graveside services on Saturday, May 21, at noon at the West Tisbury Village Cemetery. A potluck reception will follow at the Holy Ghost Society, 137 Vineyard Ave., Oak Bluffs.

In lieu of flowers, the family is asking for donations to be made in memory of our sister Deborah Willoughby to the Dana-Farber Cancer Institute. Please make checks payable to Contributions Service Office, and mail to 10 Brookline Place West, 6th floor, Brookline MA 02445.