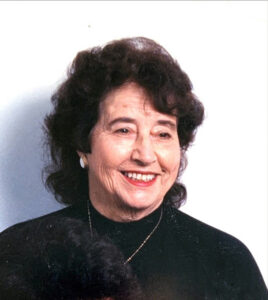 Daughter of George Packish and Annie Amaral Packish, Theresa was a dedicated and admired part of a large Portuguese American family and community. Theresa grew up in Edgartown, one of 11 siblings, the eldest daughter. Her family eventually moved to Oak Bluffs, where she attended school and helped raise her many brothers and sisters.

As a hardworking family person, Theresa held many jobs throughout her life, including caretaking and working at the Art Cliff Diner, where she eventually met her future husband, Lester Baptiste Sr., honorably discharged from the U.S. Marine Corps. In 1954, they were married and moved to the Baptiste family home on Oak Hill Avenue in Vineyard Haven. Mrs. Baptiste went on caretaking until 1970, and then became a cook at the Tisbury School.

Theresa was an active and well-known member of the community, being involved with many events at St. Augustine’s Church, the American Legion Auxiliary Post 257, and the Portuguese-American Club.

Mr. and Mrs. Baptiste eventually moved to their longtime home on Lake Tashmoo in 1967. The Baptiste home became a popular destination for “Tashmoo Turnouts,”New Year’s Eve and summer parties where friends and family could enjoy music and good tidings.

She was predeceased by her husband, Herbert Lester Baptiste Sr. She is survived by her daughters, Sheila DeCosta and Diane Estrella; and her sons, Lester Baptiste Jr. and Kim Baptiste. She leaves behind many other members of a beloved family, including her sisters Mardell Francis and Emily Frank; brother George Packish; along with many grandchildren, great-grandchildren, nieces, nephews, and cousins.

Her funeral Mass will be held on Wednesday, May 4, at 11 am at St. Augustine’s Church, Franklin Street, Vineyard Haven. Her burial will follow at Oak Grove Cemetery, State Road, Vineyard Haven.