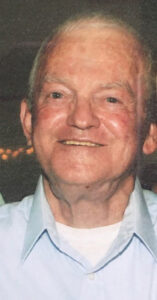 Paul ventured to the Vineyard in 1954 at the age of 18. He held many jobs throughout his life, including being a milkman, working for a gas company; he was the Edgartown shellfish warden for two terms in the 1970s, he spoke often about being the night watchman during the filming of “Jaws,” and babysitting Bruce the shark at night, and lastly retired as a security guard and aircraft fueler at the Martha’s Vineyard Airport.

Anyone who knew Paul knew him as “Lefty.” He enjoyed the bowling league during his early years on the Island, fishing the Island waters with his lifelong friend Tousa Tilton, raising his two children with his former wife, Beatrice J. Lawry, and spending time with all his grandchildren.

In addition to his parents, Lefty was predeceased by his four brothers and one sister. He is survived by his son, Gary Ronhock, and partner Evet Hines of Edgartown; Brenda Fauteux and husband Henry Fauteux of Edgartown; three grandchildren, George Fauteux and fiancée Brianna Strelecki; Ashley Fauteux; Mallory Calamare and husband Dante Calamare of Oak Bluffs; four great-granddaughters, one great-great grandson, and many nieces and nephews.

A private service is planned for later in the spring in honor of Lefty’s favorite pastime.