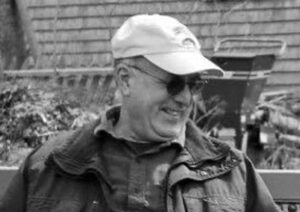 Born April 12, 1943, in New York City, he moved around a lot as a child, living in France, Chicago, and Pennsylvania, to name a few locales. William served his country during the Vietnam era, and then went on to graduate from the University of New Hampshire with his master’s in chemical engineering. He went to work as a chemical engineer for Polaroid for many years before retiring to Martha’s Vineyard, where he and his wife opened the Admiral Benbow Inn.

William was a devoted husband and father. He enjoyed finishing, building furniture, and constructing BMX ramps for his grandchildren. He had a deep love and interest in lifelong learning and science. He was always looking for new ways to broaden his knowledge.

William loved watching classic black and white movies and taking long walks with his wife and puppy Gilligan II. He loved fishing the Derby each fall, and visiting Wasque with his wife Mary, and dear friends Russell and Erica Fritz, and Ed Pierce.

William was known for his love and ability to cook. His “Sticky Buns,” along with the decadent family feasts, will forever be remembered by his family.

In lieu of flowers, William’s family requests memorial contributions to be made to the Perkins School for the Blind. Donations in memory of William can be made at perkins.org.