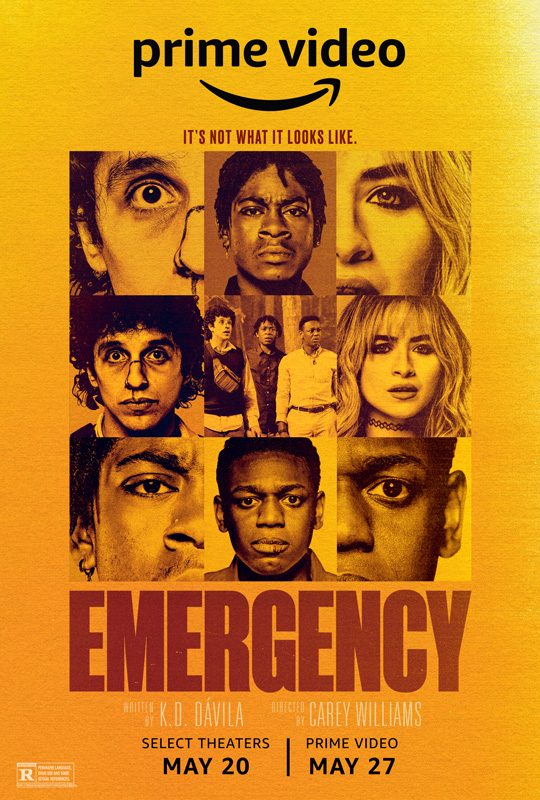 “Emergency” opens at the M.V. Film Center on Friday, May 20. What starts out as a comedy drama with college students celebrating spring break turns into a more serious thriller about racism. Adapted from an eponymous short film and directed by Carey Williams, “Emergency” won the 2022 Sundance screenwriting award, and was nominated for Sundance’s Grand Jury Prize.

The film opens with a white British professor lecturing to undergrads on “hate speech” and, in particular, repeatedly using the word “n_____.” Once the class — a stand-in for one at predominantly white Emory University — is over, the class’s horrified two Black students, Kunle (Donald Elise Watkins) and Sean (R.J. Cyler), discuss whether they should try to get the teacher fired.

Kunle is the more serious student, who has gotten into Princeton for graduate work and is working on a mold project that will ensure his acceptance. Sean, perpetually stoned, is a bit of a cut-up, ready to celebrate at the fraternities in hopes of making it onto the Black Student Union’s Hall of Fame there.

Before partying, the two boys head back to their room, shared with Latino roommate Carlos (Sebastian Chacon), to check on Kunle’s research project, and they discover Carlos has left the door open. To their shock, a teenage white girl, Emma (Maddie Nichols), is unconscious on the floor. Carlos, replete with headphones, hadn’t even noticed her.

Emma, whom they nickname Goldilocks — an example of the film’s light comedic touch — is unresponsive, and Kunle and Sean debate about what to do with her. In the post–George Floyd era, they realize that if they call the police they will likely be arrested, if not killed. They plan initially to drop Emma outside at one of the frat parties, but seeing her serious condition, at Kunle’s insistence, decide they should take her to the nearest hospital.

In the meantime, Emma’s sister Maddie (Sabrina Carpenter) looks for her at the frat party they had attended together, and not finding her, grows increasingly more anxious. With friends Alice (Madison Thompson) and Rafael (Diego Abraham), outfitted comically in a Roman-style toga, Maddie tracks Emma through her cell phone. In another nod to humor, they conduct their search on a bicycle.

What began as a conventional college comedy turns into something far more serious, with aspects of a thriller. Kunle, Sean, and Carlos grow worried because one of the taillights on their car is out, and they suspect they will be stopped by the police. To avoid them, they escape on woodsy streets. They run off the road when Emma wakes up enough to assault them, then runs away.

In this fashion, “Emergency” balances elements of comedy with a more serious consideration of racism. The comic touches keep the film lighter yet allow discussion of what Blacks can go through in an all-white environment. It’s an unusual combination.

Information and tickets are available at mvfilmsociety.com. For information about films playing at Edgartown Cinemas, visit entertainmentcinemas.com/locations/edgartown.