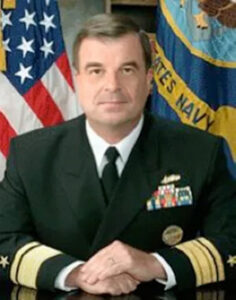 Michael was born in Torrington, Conn., to Peter and Virginia Nowakowski on Oct. 22nd, 1952. He had four loving sisters, Ginny, Janet, Diane, and Lauren. After graduating from Torrington High School in 1970, Michael attended Ohio University. He graduated in 1974 with a bachelor of science in communications. He then entered the Navy via Officer Candidate School in Newport, R.I., and was commissioned as an ensign.

Michael met his beloved wife, Marsha, while at an officer’s club in Virginia Beach, Va. They married in 1977, and would spend the next 45 years inseparable, despite numerous deployments and time at sea over Michael’s extensive naval career. Marsha was his best friend and partner in life. Together they had two children, Amy and Mike. Michael was undeniably proud of his family, and his commitment to those he loved was unwavering.

Michael also had an extended family that was the U.S. Navy. There he successfully led and mentored thousands of Marines and sailors, fostered lifelong friendships, and traveled the world. Michael had a remarkable naval career as a surface warfare officer. He left behind a

tremendous legacy as a two-star admiral, with significant contributions to his country in his 33 years of service.

Michael earned his master of business administration from Hofstra University as well as a master’s degree in national security strategy from the National War College. After his retirement from the Navy in 2007, he held a position as vice president, defense contracts at Colonna’s Shipyard in Norfolk, Va. Michael also served as a senior mentor at the U.S. Naval War College.

Michael renovated a cottage in the Campgrounds, doing all the work himself, and finished it right before he was diagnosed with cancer last year. He and Marsha planned for it to be a summer home, but have been living here full-time since the project began a couple of years back. The cottage is named “The Admiral’s Quarters.”

We are proud to call Michael our husband, father, grandfather, brother, uncle, cousin, shipmate, and friend. He has left an imprint on all our hearts, and we will miss him greatly.

Michael is survived by his wife, Marsha; his daughter and son-in-law Amy and Edwin Manley; son Michael Jr.; grandchildren Julia and Grace Manley; and by sisters, aunt, multiple cousins, nieces, and nephews.

Future burial at Arlington National Cemetery and memorial service will be set at a later date.

In lieu of flowers, please consider donating to the Fisher House Foundation, fisherhouse.org, in honor of Michael.