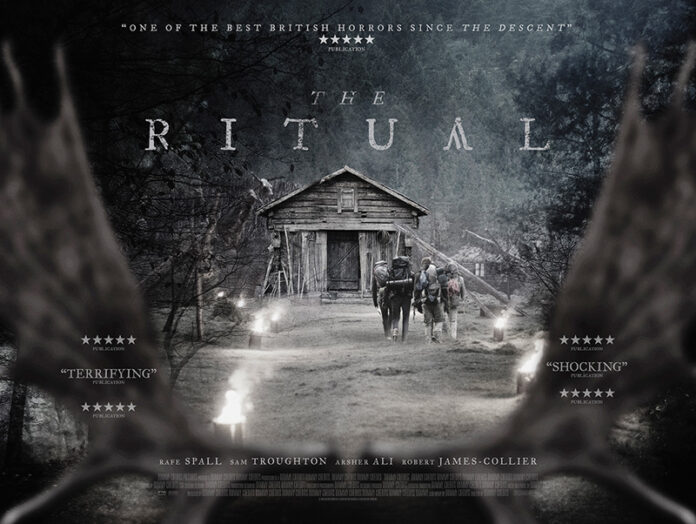 Have you ever come across a random image or video online and thought “Where did this come from?” That’s what happened when I saw a gif of the Eldritch Abomination from “The Ritual,” a 2017 horror movie available on Netflix.

Four men reunite for a camping trip atop Swedish mountains in memory of a dead friend. However, the catalyst toward meeting the monster is sparked when Dom, played by Sam Troughton, injures his knee. In an attempt to get to the nearest town as soon as possible for rest and booze, Hutch, played by Rob James-Collier, suggests cutting through the forest. Although Luke, played by Rafe Spall, is skeptical about the decision, he goes along with Hutch’s decision.

Not long after entering the forest, the forest’s Nordic and occult elements creep their fingers upon the group of friends. In particular, Luke and Phil, played by Arsher Ali, are subject to mysterious afflictions. It’s actually not revealed why the afflictions happen to them, and leaving things unanswered is a pattern in the movie. Rather than being frustrating, I think it helps engross the viewer with what the group of friends go through. It is also appropriate for the setting. The four men are walking through a Scandinavian forest untouched by modern human development for decades. When you’re in a dense forest, you don’t know what lives in it and you don’t know what may stare at you between the trees.

A weakness of the film is that it is formulaic. If you have seen a few horror movies before, you can recognize the story beats in “The Ritual.” Despite the genericness of the movie, it can hold tension in scenes involving the monster. Director David Bruckner utilized point-of-view shots that established how the friends have become prey to the monster and its forest.

This is a movie you can have fun watching on a Friday night with some friends and a couple of beers, but it certainly isn’t taking home any awards.