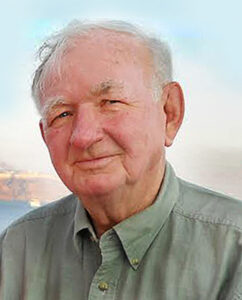 Bob graduated from Roanoke’s Jefferson Senior High School in 1952, and from the University of Virginia in 1956 with a degree in mechanical engineering. He was a member of the Alpha Tau Omega social fraternity at U.Va.

Early in life Bob developed an engineer’s passion for flight. His first job after college was with the Glenn L. Martin Aircraft Co. in Baltimore, MD. America’s space program at Cape Canaveral, Fla., next attracted his skills. Bob was extremely proud of his service there with the top scientists and engineers engaged in the Vanguard program.

Popular and outgoing by nature, he possessed a unique ability to communicate intricate knowledge either verbally or through the written word. This talent led to a position with Aerojet General in Los Angeles, and eventually to his work for Aerojet as a lobbyist in Washington, D.C. His next employment, beginning in 1968, brought him to the Boston area, where for 10 years he became a highly successful director of professional photographic and technical products for the Polaroid Corp. He later served as advisor and president of the Dacus Corp., a dry foods packaging company in Tupelo, Miss.

During the years with Polaroid, Bob and his first wife, Alice Freeman Sharp of Louisville, Miss., lived in nearby Hingham. After the death of his wife in 1992, he remained a resident there until 1995, when he remarried and moved to Martha’s Vineyard.

The rest of his life was spent as a very active retiree traveling widely with his wife of 27 years, Elizabeth (“Bess”) Smith Stone, flying gliders out of Katama Airport, singing in the Federated Church Choir and the Island Community Chorus, reading voraciously, and entertaining friends, including complete strangers, with an endless supply of questions and stories always garnered from firsthand experience!

In lieu of flowers, the family requests that memorial gifts be sent to a charity of your choice. A memorial service is planned for sometime in June.