Last Thursday morning I emailed Nancy Slonim Aronie and told her I wanted to interview her about processing grief through writing. Aronie is a wise friend, whose inspirational new book, “Memoir as Medicine,” is about processing pain and grief as much as it is about writing one’s memoir.

By the time I reached out to Aronie, the question many of us were asking was, How can we make sure this never happens again? And how can we make sure that this time never again means never, and not never for the next 10 years, or the next 10 days, or the next 10 hours? We started asking this question on Tuesday when news broke of another unimaginably horrific school shooting, this one in Uvalde, Texas. No. Edit that. We’ve been asking since Saturday, May 14, when 10 people shopping in a Buffalo supermarket were murdered by an 18-year-old with a semiautomatic. Wait. That’s not right either. We’ve been asking since Sandy Hook 10 long years ago. No. We’ve been asking since before the terrorist attacks on 9/11. Didn’t we start asking this question on April 20, 1999, on the day 12 students and one teacher were killed by two students at Columbine High School?

How can we make sure this never happens again? We’ve been asking this question for so long that it feels rhetorical at this point.

And so I emailed Aronie to discuss processing the universal grief we’ve been dealing with through writing, and she wrote back immediately, “Come over now.”

I hopped in my car and drove to Chilmark, to her home and the site where she’s been leading the Chilmark Writing Workshops for the past 40 years. Aronie realized decades ago that creativity is released when people recognize they are in a safe space. During her workshops, where critiques are positive rather than lacerating, people feel empowered to reveal their stories, often for the first time. People start to understand that their stories matter — that we all have a story that matters.

“The only rule is when you finish reading, we’re going to tell you what we love,” explains Aronie. “We’re not really looking for the Pulitzer-prizewinning writer here, but the thing is, what I’ve noticed is that when people are safe, they write brilliantly.”

After witnessing the transformation that happens to person after person during years of facilitating writing workshops, Aronie formed an idea that she believes could help fundamentally alter this cycle of rage and pain and carnage that we are in.

“What if we had a kind of Peace Corps that’s like a StoryCorps in this country?” asks Aronie. “If millions of people were able to tell what happened to them and not be judged by it, and were able to be heard, it could have a huge impact, and it could happen very quickly.”

She explains, “I have always felt that shame is the biggest cause of brokenness, and everybody’s been shamed, but when someone tells their story and it’s heard, they literally start healing. And once you’ve had that healing, you don’t want to hurt somebody else.”

Her idea is for a nationwide program where groups of 12 to 14 people come together with a trained leader. “You don’t talk about politics. You don’t talk about religion, or any of your disagreements. You talk about your shared humanity — which is, When you were 9 and your grandfather came in and hit your mother, what was that like? Can you go back to that and feel it? If we can give people who have shut down and stopped feeling, because they had too many traumas, a safe place to tell what happened to them, and they don’t feel shame and can express who they are, and be heard and not judged — if they can tell their stories — then they can begin to heal.” She adds, “what happens is that people will take the risk of saying, This is who I am, this is what happened to me. And they are heard, and not just heard, but honored for taking the risk of being so honest.”

Aronie clarifies, “Of course, there are very sick people, and you cannot think that you’re going to make everybody well, but I would say a lot of people who were listened to and respected for their story, instead of being judged, would soften, and we would get back to having compassion for people, which is absolutely not happening here anymore.”

Before I left to head back to Oak Bluffs, Aronie said these words which I thought about as I drove past farms with grazing cows off Middle Road, and by the airport which was gearing up for Memorial Day weekend, and through the roundabout which would direct me toward home. “Most of us grew up thinking vulnerability was weakness. Why wasn’t it told to people that vulnerability is actually strength?”

Nancy Aronie will be on a panel about writing about grief at Islanders Write. She will also be signing copies of “Memoir as Medicine” on June 5, from 3 to 5 pm at Edgartown Books and June 8, at 5 pm, at the Chilmark library.

As we count down to the MV Times event Islanders Write, which begins on Saturday night, July 30, and continues through July 31 and August 1, event producer Kate Feiffer will send weekly dispatches from the Writer’s Table. For more information about Islanders Write, visit islanderswrite.com. 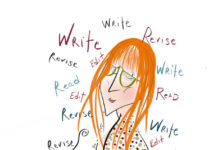