I was trying to remember when and where Catherine Keller and I met, but am not wholly sure, except we’ve been friendly over many years. Catherine Keller has lovingly overseen the gardens at the Look Inn, which her husband, Freddy, and she own. He bought the old inn in 1981, after the previous owners, three sisters (who had added the third floor and back porch) had all passed away. In the 1920s there was a vegetable garden in front, though grown over in 1981, and just a couple of lilac bushes remained. After getting permission from their neighbors they established the Look Inn, formerly called the Hi-Ho Hill House. There’s also a small original building used for storage, and the area where Catherine keeps her garden tools still has the two original outhouse seats.

Catherine grew up north of San Francisco in Tiburon. She explains her parents had moved to California from the farmlands of Iowa, and wanted to live a more comfortable, suburban life, besides her mother had seven children (Catherine being the sixth child) to take care of. There was no gardening in her childhood, though she recounts in seventh or eighth grade convincing a friend to create a vegetable garden plot at her friend’s home. She says, “I don’t think it was very successful.” Catherine first attended college in Marin County, since she wasn’t sure what she wanted to do, and that’s also when she started gardening. Not only did she work for someone else part-time, she helped older gardeners with their gardens, and got to work with a lot of “people who had fabulous gardens.” I ask, “Is that where you learned to garden?” And Catherine said, “Yes, it’s really where I learned what was what, what not to do, and what each [person] loved about their gardens. Then I started working with a woman who was really into biodynamic gardening, and she had a lot of little altars all over the place. Later I returned to the College of Marin, and was going to study landscape design and horticulture, and started taking a bunch of classes, and then decided to do a Master Gardener program through U.C. Berkeley. That was a lot of fun, then I moved to the Vineyard and started gardening here.”

Catherine had a friend from California who moved to the Vineyard and insisted she had to come visit. She came to visit, came back the following summer and “lived in Tom Hodgson’s goat shack with one light bulb, and rode [her] bike to Morning Glory Farm every day.” Then she decided to go to massage school in San Francisco and at the Esalen Institute, getting jobs in catering, traveling when she could, and exploring as much as possible. In her mid-thirties, Catherine returned to finish up her undergraduate degree at Lesley College, and that’s when she decided to go into “psychology counseling, and got a master’s degree at B.U.” She did one internship at the M.V. Hospital and another in Boston. Oh, and she met her husband on-Island in 1989.

Getting back to the garden, she planted the common beech tree that now offers a shade room on the side lawn beyond her vegetable garden. In fact, it’s one of Catherine’s favorite places in the garden, and she has hung two swinging seats from the tree. There’s a tulip poplar Catherine planted in the yard that she had received on a birthday from her mother. She had always admired one in front of another neighbor’s yard, and loved how fast they grow. She still has some “asparagus sprigs popping up from when it was a vegetable garden.” Between 2005 and 2015, she and her husband lived in California to help care for her parents, before moving back and taking over the inn again.

Fred is the official lawn mower, and loves his electric mower. When COVID hit, Catherine decided to start a vegetable garden; the next year she added two more beds, and this year she decided to add a small hoop house bordered by a cold frame, where she grows arugula and lettuce, plus basil. Catherine starts her plants off from seed. She trades vegetable extras with other gardening friends. When I visited Catherine in late May, the chives with their purple flowers were abundant. In the hoop house, erected this spring, there were chard, garlic, Asian greens, beets, rhubarb, assorted varieties of sage, and newly planted beans. She admits her “lemon cucumbers didn’t really do well.” There’s milkweed along the outbuilding she’s leaving for the butterflies. She has both white and pink rose climbers, and once she puts in supports they will grow over an arched entry. We pass oregano and lillies that will be in the red family. There are hydrangea trees (which can grow to 25 feet high), and the iris are just starting to come to life. The grape hyacinths were at the end of their splendor; unlike regular hyacinths, these belong to the lily family. Catherine makes sure to visit gardens when she travels to both be inspired and continue learning.

There’s an area for tomatoes and beans where she grew tomatillos last year, and will move them for this year. She let her kale flower because “it’s so pretty.” Pointing, she says, “Look at all the honeybees on them.” She grows chocolate mint, sunflowers, and assorted peppers. She dried the peppers last summer to use for cooking. She made some ceramic birdhouses at a friend’s studio, which adorn posts along one side of the garden. She also made colorful ceramic stepping stones that are placed in her garden beds.

For their Look Street exposure, Catherine planted evergreens as a visual barrier, letting go of the flower beds she previously cultivated. She’s had so many different varieties of perennials along the road, but between salt from winter plowing and sanding, there’s been a lot of turnover, and now the trees are more important. There are gorgeous poppies, and she had beautiful lilies growing outside the kitchen window that all got mowed down by cars. Her beach plums, planted about five years ago, “flower like crazy, but have never had a plum.” There are still peonies, vitex, and some roses in the bed bordering Look Street. “It’s sort of a mishmash,” because she no longer sees the flowers through the trees, and the road has no sidewalk or shoulder.

Catherine has rainbow chard, volunteer chives, and cherry tomatoes to trade with friends. She starts her seedlings on the back porch, moves them into the dining room, and hopes to have them in the hoop house in the future.

Catherine looks so at home in her garden, moving in rhythm with the earth and nature she coexists with. It’s a pleasure to witness her joy and the love created in such a simple (not always easy) relationship. Catherine says, “The beauty of gardening is you can always learn something else, always a different experience [each season], it’s constantly amazing to see what [the plants] will do.” 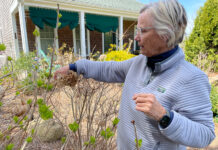 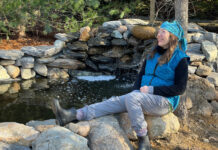 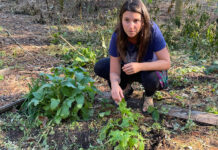